Chhattisgarh decides to scrap a privatised water supply project. What happens next? 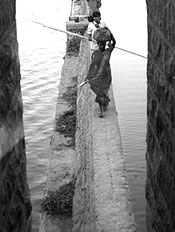 the Chhattisgarh government has decided to cancel the agreement under which a project to supply water from Sheonath river to factories was leased out to a private company. At a high-level meeting on April 2, chief minister Ajit Jogi instructed the advocate general, Chhattisgarh State Industrial Development Corporation (csidc) and the departments of water resources, public health engineering and legal affairs to scrap the deal immediately. The departments are yet to submit their reports. The deal had become the rallying point for groups opposed to privatisation of water supply, who termed it as the 'selling of a river'.

In the eye of the storm is a 'build-own-operate-transfer' (boot) agreement signed in 1998 between the Madhya Pradesh government and private firm Radius Water Limited to supply water to the Borai Industrial Growth Centre in Chhattisgarh's Rajnandgaon district. A stretch of 23 kilometres of the river was ceded to Radius Water Limited, which is developed and owned by Kailash Engineering Company Limited.

Adverse reports in the media made the state government distance itself from the agreement. It asserted that the pact was signed before Chhattisgarh's creation in November 2000 (see: Down To Earth, February 15, 2003). With elections to the state legislature due later this year, the decision to cancel the project is in line with the popular sentiment. The two main criticisms of the project were:

• Residents of villages surrounding the project area were not consulted. They feel cheated by the fact that their traditional rights and access to the river have been restricted.

• The agreement ensured payment for a minimum of four million litres of water per day by the state government, regardless of the amount of water used. csidc lost Rs 1.29 crore between December 2000 and June 2002. This is because water-intensive factories haven't come up as had been expected.

Now, the issue is: what happens to the project? Who will own the anicut built by Radius? Who will decide about the usage of water? What will be the nature of the settlement with Radius? csidc does not have the money to pay back the company, which had taken a loan to build the anicut.

Shakrajit Nayak, state minister for water resources, says his department would pay the compensation and would settle the loan for the anicut. csidc would also decide the amount to be paid back. The anicut is seen as the first in a series of similar structures that the department has planned for the basins of Sheonath and the Mahanadi rivers.

This region is categorised as a rain shadow area, and a proposal for 52 anicuts in the two basins has been sent to the Union government for financial support. Nayak says work has begun on six anicuts, which are expected to be ready before the monsoon sets in. While the water supplied to the industry would be priced at Rs 0.45 per 1,000 litres, according to Nayak water for irrigation would be provided free of cost.

The agreement also mentioned the possibility of an effluent treatment plant for the water-intensive industries in Borai. But the future of the plant is still uncertain, as it is not clear whether or not the state government intends to go ahead with the plan.