Dhinkia on the boil: Opposition, rights workers stopped by cops

The police had baton-charged farmers in Dhinkia January 14, who were protesting the forced acquisition of their betel vineyards 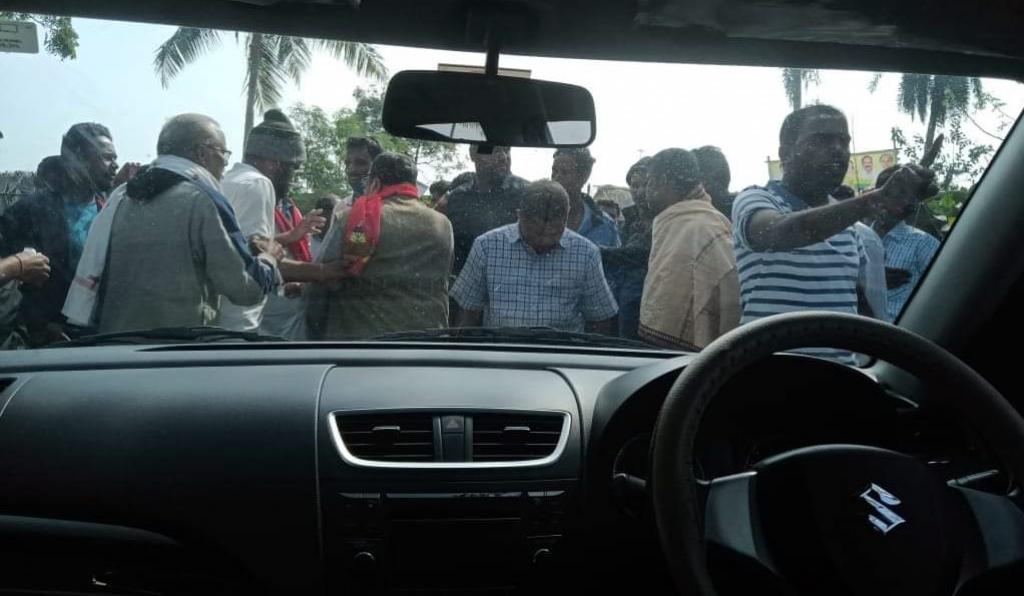 The vehicle of some leaders is blocked by persons at Trilochanpur to prevent them from entering Dhinkia village in Odisha. Photo: Ashis Senapati

The move came a day after the police baton-charged farmers in the village protesting the acquisition of their betel vineyards by the Odisha government for the construction of a proposed steel plant by Jindal Steel Works (JSW) Ltd.

“We were stopped around a kilometre from Dhinkia at Trilochanpur village by some armed hoodlums in the presence of the police en route to meet the victims who suffered injuries January 14,” Prafulla Samantray, the president of Lok Shakti Abhiyan, a non-profit, claimed.

“Some goons abused us and blocked our vehicle in the presence of the police. But the cops did not take any action against them,” Samantray alleged.

He added that stopping them from entering Dhinkia was a sign of the state government’s fear.

“We will return for now. But we will continue to fight for justice for the people of Dhinkia and support the ongoing agitation by the villagers against JSW’s plant,” Samantray added.

He alleged that many villagers could not avail medical assistance as the police had sealed all entry points to Dhinkia and had not allowed anyone to visit the village.

He added that the cops had illegally arrested six villagers and had falsely implicated over 300 villagers.

The port town of Paradip in Odisha and its neighbouring coastal areas may submerge in the Bay of Bengal by the end of the 21st century, according to a recent analysis by the United States National Aeronautics and Space Administration (NASA).

Paradip will be under 0.59 metres of seawater in 2100, according to estimates. The construction of a steel plant near it will only aggravate sea erosion.

Many have questioned Odisha Chief Minister Naveen Patnaik for his silence over the issue.

Most of the villages in the area were home to mangrove and casuarina forests, betel vineyards, paddy fields and fruit-bearing trees, Mahendra Parida, a farmer leader, said.

No forest land can be given to anyone until all the rights of the people in the area are recognised and their consent is given to the project, under the Scheduled Tribes and Other Traditional Forest Dwellers (Recognition of Forest Rights) Act, 2006, Parida said.

“This is the requirement of the law, acknowledged further by a Union environment ministry order of August 3, 2009,” he added.

“The state government is keen to sign memorandums of understanding with big corporate houses and practically gift away the best deposits of iron ore as captive mines for meagre amounts of royalty,” Jagyaswar Samantray, a leader of the Communist Party of India (Marxist), said.

Sarat Das, a farmer from Dhinkia, who sustained injuries January 14 when the police used batons against him, said:

The continuous peaceful resistance of the residents of Dhinkia and other villages forced the South Korean steel company Posco to exit six years ago. Now, we are determined to oppose any move of the government and JSW to build any plant over our land.

Umesh Panda, the additional superintendent of police, Jagatsinghpur, however refuted the allegation the police were responsible in any way for barring entry to Dhinkia.

“The residents of Trilochanpur advised some outsiders not to visit Dhinkia January 15. As a result, they returned back. We arrested six persons January 14 including Debendra Swain, the former Panchayat Samiti member of Dhinkia. Security has been tightened in the area to check any untoward incident,” Panda said.