Dhinkia on the boil: Odisha Police turn violent against protestors

The administration in Dhinkia village in Odisha’s Jagatsinghpur tried to forcibly acquire betel vineyards January 14 for Jindal Steel’s proposed plant, only to be resisted fiercely 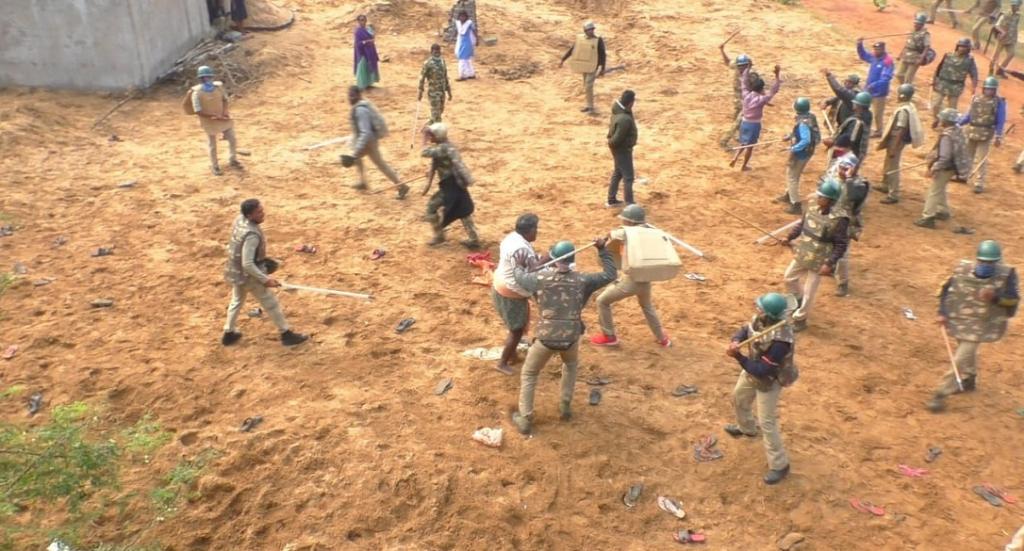 Several villagers have been opposing the Odisha government’s plan to acquire land and betel vineyards for JSW to set up a 13.2 million tonne per annum steel plant in the seaside Gram Panchayats of Dhinkia, Nuagaon and Gadakujang.

Large numbers of armed police entered Dhinkia village January 14 by breaking the wooden barricades erected by the residents. The leaders of JSW Pratirodh Sangram Samiti used women and children as shields to prevent the entry of police and officials.

But armed police used batons to disperse the agitators. As a result, many were injured, Ganesh Das, a resident of Dhinkia, said.

On January 14, at least 500 villagers, mostly women, tried to attack the police and officials, for which the police used batons to disperse them. We have temporarily stopped the dismantling of betel vines. Many people are in favour of the establishment of a steel plant in this area. But a few people are trying to foment trouble in Dhinkia.

Das added that the police had arrested Debendra Swain, the former Panchayat Samiti member of Dhinkia, on charges of fomenting trouble in the area.

Umesh Panda, the additional superintendent of police, Jagatsinghpur said the administration had appealed to all betel vine farmers January 14 to allow them to acquire their betel vineyards standing on government lands.

“Some persons with an ulterior motive opposed the land acquisition works in Dhinkia for which the police used batons to disperse them. Some policemen sustained injuries when agitators attacked them,” he added.

Twelve platoons of police have been deployed on the proposed steel plant site in order to ensure smooth land acquisition work and prevent any untoward incident in view of threat by some anti-land acquisition villagers, Panda said.

But the other side is equally adamant about not giving in.

Sabita Das (34), a female protestor from Dhinkia said: “We have been eking out our livelihoods by raising betel vines. But the officials are trying to dismantle our betel vines. We will fight against JSW till our last breath.”

“The state government and its armed police in cahoots with JSW men are terrorising people in this area. They illegally flattened the betel vineyards of many villagers. But we will not give an inch of our land for JSW to establish a steel plant,” Anil Behera, a paan farmer from Dhinkia, said.

“The police attack is condemnable. It speaks volumes of the state government’s attitude towards democratic movements,” Prafulla Samantray, the president of Lok Shakti Abhiyan, a non-profit, said.