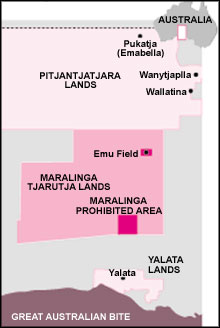 the Australian government is being bombarded with criticism for deciding to hand back a 3.2 lakh hectare (ha) site to its traditional aboriginal owners despite fresh evidence surfacing that the land is still toxic from nuclear tests conducted 40 years ago.

Maralinga, the tract in question, is located in the South Australian desert (see map) and is to be returned to the Tjarutja tribe. While the Australian Radiation Protection and Nuclear Safety Authority (arpansa) defends the move claiming it has followed the best practice in cleaning up the site, critics point out that parts of the land are not fit to inhabit.

In the 1960s the Australian government had evicted the aborigines from the land to allow the uk to develop nuclear bombs. Seven atomic bombs were exploded at Maralinga. Many development trials were also conducted at the three sites within Maralinga: Taranaki, tm and Wewak. Of these, Taranaki -- where 15 trials were carried out between 1961 and 1963 -- was the worst hit.

During each trial the heat of the explosion melted the plutonium and uranium. Consequently radioactive debris was tossed up to 1,000 metres into the air, resulting in its getting strewn over a large area. Alan Parkinson appointed as the Australian government's representative in 1994 to oversee the project contends that following the tests, hundreds of tonnes of contaminated steel, concrete and other items were buried in 21 shallow pits at Taranaki. And hundreds of square kilometres of land was contaminated with plutonium and uranium. Incidentally, Parkinson was also a member of the government's advisory committee but resigned later in protest.

In 1967, the uk conducted 'Operation Brumby' -- a 'final' cleanup of the site -- which was rubber-stamped by the Australian government as 'mission accomplished'. It accepted that except for some small fenced "islands", the site was free from contamination and absolved the uk of any further responsibility.

But surveys in the 1980s by the Australian Radiation Laboratory showed that the site was far from clean. Their findings eventually led to the latest cleanup project undertaken by arpansa. Nearly us $108 million has been spent on the exercise, with the uk footing a part of the bill.

But with the Australian science minister, Peter McGauran, having announced that the land will be given back to the people within a year, a controversy has broken out regarding the safety of its future inhabitants who are also its original owners.

"The aborigines wish to return to the land, provided it is safe to do so. They have been advised that about 45,000 ha of land is not suitable for permanent occupation and is encircled by boundary markers. While these markers may last 50 years, half of the plutonium will still be there after 24,000 years," says Parkinson.

"John Loy (chief executive officer of arpansa) was incorrect in saying that the Maralinga cleanup project represented the world's best practice. The programme was a compromise from the beginning and was never intended to be a thorough cleanup," alleges Parkinson, and adds: "There are still hundreds of square kilometres of land contaminated with plutonium.

The government says that all but 12,000 ha is now safe, but this is misleading. What it means is that 12,000 ha of land is still contaminated over a certain limit."

He points out that even at that limit an aboriginal following a semi-traditional lifestyle would receive an effective dose five times the permissible limit. Within the 12,000 ha, this amount would be up to 13 times greater. Sean Parnell, senior reporter with Australian newspaper Daily Courier, says he is in possession of three studies commissioned by arpansa showing that the aborigines will have access to potentially hazardous land.

But Geoff Williams of arpansa rebuts such allegations: "All areas shown in the 'Draft Inhalation Dose Assessment for Remediated Land at Maralinga' are within acceptable limits for all envisaged land uses. One can see (from the reports) that the conclusion is that there was a better-than-expected level of cleanup of contamination."

An extract from the draft inhalation dose assessment by arpansa (see box: Cause for concern), however, mentions that Taranaki has high levels of plutonium dust and possibly contaminated particles "which are potentially hazardous from the point of view of ingestion or wound contamination".

Meanwhile McGauran has gone on record as saying that the rehabilitation programme met standards agreed to by the stakeholders in 1995, but "it was always the case that some areas would be restricted from permanent habitation".

Parnell claims that a draft report from field monitoring at Taranaki noted that one section had not been rehabilitated because "to do so would have effectively destroyed the vegetation and top-soil over an area of 5,000 ha, which would take the land centuries to recover".

Parkinson succinctly sums up the mishandling of the case: "Whoever accepts responsibility for the site should recognise that they will have to rely for several thousand years on assurances from a government that has not adhered to agreements made only 10 years ago (on the cleaning up of the site)."