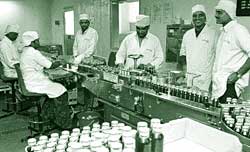 a war that started early this year between the government and India's chemists and druggists over drugs containing psychotropic substances (psds) is about to end. After receiving assurance from the government, the latter have agreed to suspend their protest ban on the sale of psds and make them available to consumers till February 25, 2005. By then the government might issue an amendment to the Narcotic Drugs and Psychotropic Substances Act (ndps), 1985, the bone of contention between the two parties. What is unfortunate is that the move will push the issues of misuse of drugs and drug trafficking under the carpet.

Chemists and druggists allege that the ndps is used to harass them. Nearly 5,50,000 of them took psds, including painkillers, anti-depressants and cancer treatment drugs, off their shelves from February 1, 2005, in protest. "After holding meetings with concerned parties, the government has decided to issue an amendment to the controversial Rule 67 of the ndps. We are working with them to finalise it," says J S Shinde, secretary general, All India Organisation of Chemists and Druggists (aicod), Mumbai. But if the government doesn't act by February 25, the ban on these drugs will be reinforced.

At the heart of the controversy is sub-rule 4 of Rule 67 of ndps Act. It requires manufacturers, wholesalers and retailers of psds to fill up a document called "form 6" or consignment note, in triplicate, every time they deal in psds. They also have to 'preserve' all these forms for at least two years, failing which they can be sent to jail for at least 90 days, without the possibility of bail. The minimum fine is about Rs 1 lakh. Besides, these drugs are to be delivered at retail shops only when the shop owner is present to sign the consignment note. Delivering them otherwise could amount to drug peddling.

"If a retailer receives five drugs, he/she prepares 15 forms for these. If he/she sells 400 medicines, the number of forms to be filled is 6,000 a day. Out of these, 4,000 are to be preserved for two years. Where is the space for all these?" asks Shinde. He also points out that chemists get a license under the Drugs and Cosmetics (dc) Act, 1940, which requires them to maintain invoice and bills of psds that contain all the details sought by form 6. "Why this duplication, then? The only information missing from the invoice is the mode of transport, which we have agreed to add," he says. Chemists also allege police harassment over the signatures on the consignment note.

Some experts term aicod's protest unethical. "The law has been in force for many years. Why are chemists holding patients to ransom now? psds across the world face stringent regulations. Indian chemists should not shy away from their responsibility. The problem of harassment is administrative and not legal," argues Arun Bal, president, Mumbai-based Association for Consumers Action on Safety and Health.

But the government seems to be toeing aicod's line on the amendment, a copy of which was shown to Down To Earth by Shinde. It absolves consigners from filling form 6, provided they maintain records as per the dc Act. The clause of mode of transport has been included in the invoice required by the dc Act. The aicod is jubilant. But the fact remains that India's demand for psd s has risen in the last 20 years and easy availability of these drugs increases addiction. The issue needs to be viewed from a perspective much broader than just form 6.