Zero funds to Bengal, Lakshadweep this year, Centre admits in Parliament; activists ask to use pre-existing mechanisms to handle graft 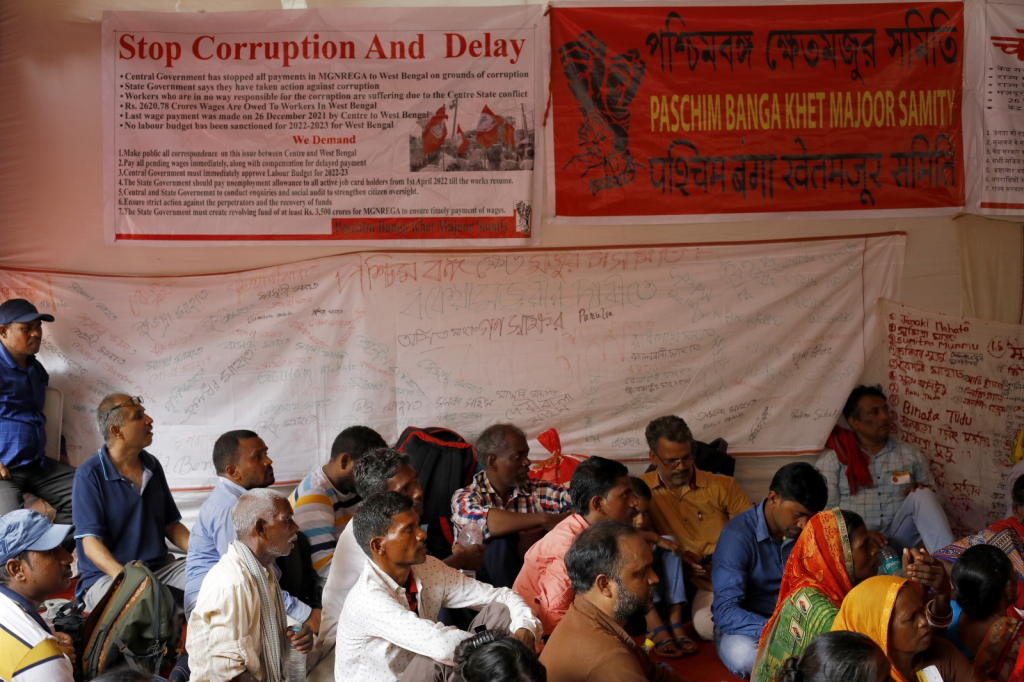 Bengal is the only state that received no funds under the 100-day work scheme in this fiscal year, Niranjan Jyoti, the Union minister of state for rural development, told the Parliament as reported by the daily Times of India.

A three-day protest at the national capital’s Jantar Mantar was also organised by MGNREGA workers earlier this month. Workers from across the country claimed that they hadn’t been paid for months, with some payments dating back to April 2020.

Trinamool Congress member of Parliament Jawhar Sircar had posed the question in the Rajya Sabha last week. Lakshadweep, a Union territory, has not received any funds either. However, Andhra Pradesh, Uttar Pradesh and Rajasthan have already been given Rs 40,000 crore. 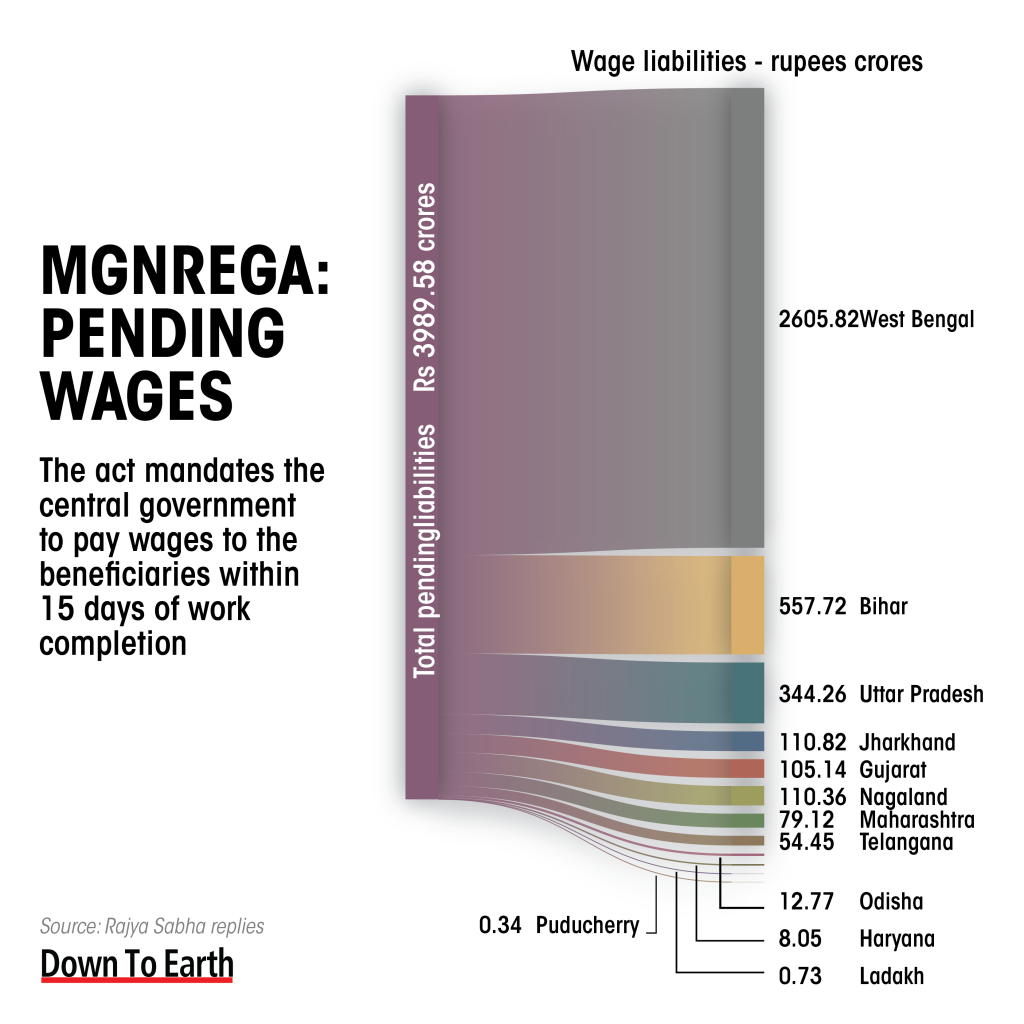 Chief Minister Mamata Banerjee had met Prime Minister Narendra Modi August 5, 2022 and asked him to intervene in the issue. The Centre owes the state Rs 7,130 crore for MGNREGA, the West Bengal government said.

Jyoti had told the Parliament in July that funds to West Bengal were stopped under Section 27 of the MGNREGA, 2005. The provisions cite non-compliance with the directives issued by the central government.

The central government cited discrepancies in several state districts and did not allocate any funds during the budget in 2022-23. A team, which inspected 63 work areas in Hooghly, Purba and Paschim Bardhaman districts in January 2021 alleged anomalies and corruption.

Cases of corruption in carrying out the scheme had been raised over the past three years, said Anuradha Talwar from Pashchim Banga Khet Mazdoor Samiti. “However, the decision to stop the funds and not allocate any budget is beyond unreasonable,” she said.

Political and panchayat leaders and block officers were corrupt, alleged Talwar, but not the workers who are the actual beneficiaries. The poor workers who put in hard work were bearing the brunt of it, she said.

“The people behind the graft are unharmed. Their salaries are not affected and no action is being taken against the alleged perpetrators,” Talwar added.

Read more: Drying up of MGNREGA allocation will shrink the rural economy further

The Bengal government was not complying to norms, alleged member of the West Bengal Legislative Assembly and Bharatiya Janata Party fucntionary Manoj Tigga.

“It is running parallel central government schemes by labelling it different names,” Tigga told Down To Earth.

But the central government’s approach is against the spirit and essence of MGNREGA, said Talwar.

“The law guarantees payment of wages 15 days after completion of work and compensation of 0.05 per cent in case of delay. The government is violating this,” she said.

Moreover, Section 27 evoked by the Centre to stop the funds can only be done for a reasonable period, the activist said, adding many workers have not been paid for nine months, which is unfairly harsh.

Not allocating an annual budget to a demand-driven scheme is another injustice, said Talwar. “People are being deprived of their right to work. The Act guarantees a hundred days of work and West Bengal, which has a high migration rate, needs such schemes,” she said.

The scheme’s key aspect is reducing rural districts and arrest migration, said Chakradhar Buddha, a researcher at LibTech India. “Stopping funds to the scheme will defeat its purpose as workers will migrate for employment,” he said.

“A recent survey across 24 South Parganas, Purulia and Nadia revealed that workers were starving as their only source of livelihood has been affected,” claimed Buddha. “People’s debt have also increased.”

“The government is violating a promise made in the highest house of democracy — the Parliament — by not issuing allowance and compensation,” he said.

A total Rs 3,989 crore are pending for the current financial year under the scheme, Giriraj Singh, minister of rural development, told the Parliament in July.

Some workers in Araria district received payments about 10 days ago that had been pending for three months.

Ranjan said that about five million people worked last year and many still await their wages. “There were no rains in monsoon 2022, which affected crop cultivation this year. The problems for the rural population are increasing and such schemes work as lifelines for them,” he added.

Work demand is dropping at a steep rate as the scheme has failed the promise to pay wages within the stipulated time, said Suresh Rathaur, coordinator of NGREA Mazdoor Union in Uttar Pradesh.

Glitches in the digital attendance system had worsened the situation for them. “Earlier, the workers could do part-time work and find other earning opportunities. The glitches tie the workers to the worksites, restricting other options,” Rathaur said.

He added that the corruption should be addressed by executing the existing provisions, bringing transparency and strengthening the parameters to track work done at the micro-level.

“But the government has chosen to limit the budget this year to Rs 73,000 crore, of which Rs 48,502 — over 66 per cent — is already utilised. Such steps are clearly aimed to squeeze and eventually kill the scheme that is crucial for millions of rural population across India,” he alleged.