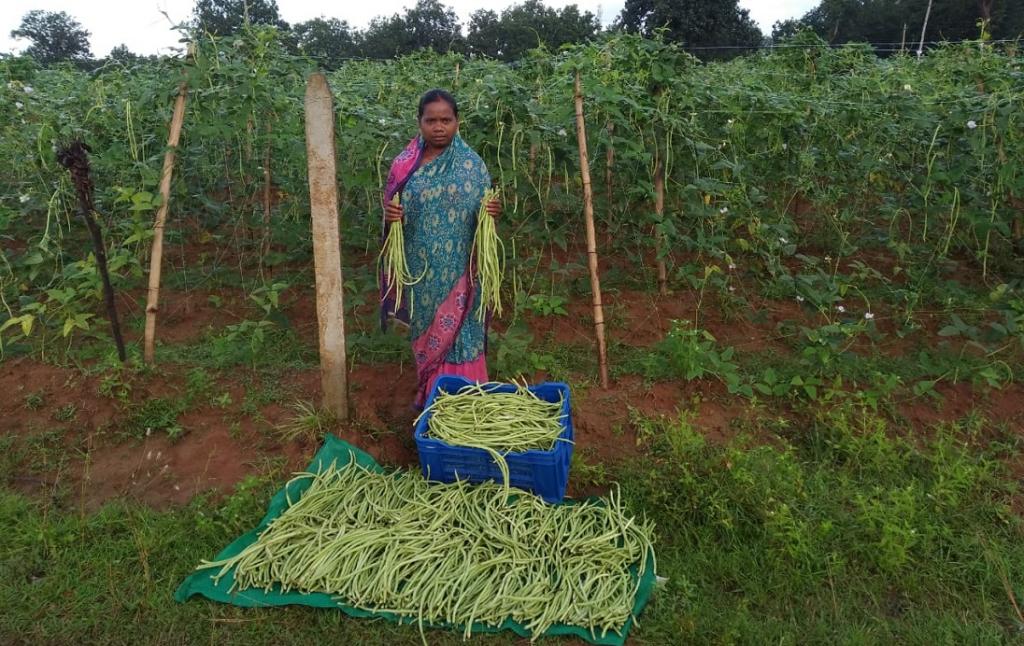 A woman farmer of Akhapolan poses with her bumper harvest of cowpeas. Photo: Suvam Kumar Jena

It is a calm spring morning in the sleepy tribal village of Akhapolan, close to the Similipal National Park in Odisha. Kiamani Naik, a woman in her forties, is all smiles as she makes her way home with a handful of bitter gourds. “I will prepare kalara bhaja (bitter gourd fry) to be taken with watered rice for my family of four as breakfast,” Kiamani says as her eyes sparkle.

“Watered rice (Pakhala Bhata) with a little salt used to be our breakfast most of the days till my wife started cultivating vegetables with a trellis (lattice system for growing vines) structure two years ago,” Kiamani’s husband Narendra Naik, said.

Narendra used to work as a migrant labourer in Chennai before the COVID-induced lockdown started in March 2020.

“Now, dishes including those prepared with beans, bitter gourd, ridge gourd, cucumber and bottle gourd accompany all our meals. Apart from vegetables, we can now add chicken, mutton, fish and eggs, which we buy from the market, to our meals,” Narendra said.

Akhapolan falls under the Thakurmunda block of Mayurbhanj district. It is now dotted with lush green bitter gourd plantations.

There are as many 75 such structures — all developed by women.

“Women of one-third households of this village have adopted the trellis system,” Suvam Kumar Jena, a volunteer of the Centre for Youth and Social Development, a Bhubaneswar-based non-profit, said.

Jena has been instrumental in providing technical knowledge and handholding support to the villagers. The income of families has gone up considerably due to the efforts of women, he added.

Sagar Simnakhia used to work as a labourer in a Tamil Nadu-based cotton factory and sent Rs 3,000 to his family per month. He, along with his co-villagers, had to come back to Akhapolan after the lockdown started.

“It was too hard to make our ends meet after Sagar’s return,” his wife, Rebati, said. “I planned to grow vegetables on our land. Despite my husband’s constant dissuasion, I started preparing the land to sow seeds. At this time, motivated by a co-villager, I attended a training programme in my village on the trellis model,” she added.

Just five women, including Rebati, started the model. A hundred others, who had received the training, were reluctant. “We put our blood and sweat to make the model a success,” Rebati said.

Government officials and non-profits working on agriculture, visited the place to observe the successful models. These aesthetically appealing trellis structures also attracted the villagers, said Suvam. Inspired, the once reluctant women too developed these models on their land, he added.

What is a trellis?

The plants climb vertically with the support of bamboo and ropes. Creepers like bitter gourd, pointed gourd, tomato, cowpea, beans and cucumber are cultivated in this system, he added.

One requires a one-time investment of Rs 3,400 to erect a trellis structure on 20 decimals of land. The efforts of the villagers got a boost as the Department of Horticulture provided Rs 12,550 per household for this, said Suvam.

According to Sushanta Kishore Khuntia, managing director of Dependable Agri Services, an agricultural consulting agency, the trellis model is an effective tool for sustainable and climate-resilient agriculture.

“Creepers are the worst sufferers of water stagnation due to extreme and untimely rainfall. The survival rate of creepers grown in the trellis system is higher than those grown in a flat-bed system,” Khuntia said.

He added that as plants grew vertically in a trellis system, there was little chance of rotting of stems, flowers and fruits due to water logging.

“Proper spacing in the system enhances the utilisation of nutrients, water, sunlight, carbon dioxide and oxygen. Proper ventilation helps in control of pests and diseases as well. Besides, with proper spacing, higher plant population can be taken up. All these result in higher yield for the farmer,” he added.

Apart from a good yield, a trellis system reduces the cost of cultivation by way of ease of weeding, hoeing, staking / propping, spraying and harvesting.

“The produce that is harvested is of better quality in terms of shape and size and is free of soil contamination. The trellis system ensures a longer post-harvest life for the produce,” Khuntia said.

The method not only earned the women a double yield, but also a new identity and respect, said Binati Biswal, who harvested 8.5 quintals of cowpea from her farm and earned Rs 23,600 last year. The sum came as a great support for her daughter’s marriage, she said.

“Earlier, we were solely dependent on the income of the male members of our families. We neither had any say in our family matters or any respect. Thanks to the trellis system, we started contributing to our family income. We also have a say now not only in our families but in the community too,” Biswal added.

“The male members of the village, who used to work as migrant labourers outside, are now engaged in farming activities that is getting them enough income to meet their family expenses,” Ramesh Naik, the former sarpanch of Hatigoda, said.

“I am thankful to these courageous women whose initiative has absorbed the shock of reverse migration and checked the distress migration,” he added.

These women, who have recently renamed their producer group as ‘Trellis Producers’ Group’, are also at the forefront of marketing of their produce collectively.

“We are in talks with ‘Murgasuni Farmers Producers Company’ which has agreed to support us in input services and marketing activities. We have also developed marketing linkages with ORMAS Mandi in Baripada and the buyers of Anandapur, Thakurmunda, Balasore, Jajpur and West Bengal for collective marketing.

“The addition of vegetables to the only-cereal-based diet of the village met the nutritional requirement of the people. Women and adolescent girls, who were the worst sufferers of micronutrient deficiency, benefitted the most,” Saraswati Kisku, an Anganwadi worker of the village, said.

Sukanti Mohapatra of Hatigoda, who has already set up a trellis system said: “Apart from a good harvest, what inspired me was the use of organic fertilisers and pesticides. Besides earning, you can also provide quality and chemical-free food to your family.”