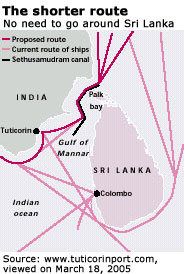 the Prime Minister's office (pmo) has raised serious concerns about the Sethusamudram Shipping Canal Project (sscp) in Tamil Nadu. The sscp aims to provide a route linking India's eastern and western shores, doing away with the current need to circumnavigate Sri Lanka. In a note issued in the first week of March 2005, the pmo raised many questions about the environmental impact assessment (eia) study on the project carried out by the National Environmental Engineering Research Institute (neeri) , Nagpur. It has sought many clarifications before according a final approval to the project. The note directs that the clearances issued by the Union ministry of environment and forests (moef) and the Tamil Nadu Pollution Control Board to sscp be put on hold till a proper evaluation of specific issues is made. In September 2004, the Cabinet Committee on Economic Affairs had also given a green signal to the project .

The over Rs 2,000 crore project will be implemented by the Tuticorin Port Trust (tpt) . The 152 kilometres (km) long canal will originate from the Tuticorin harbour in the south and run through the Gulf of Mannar, the Palk Bay and the Palk Strait in the north and northeast directions before joining the Bay of Bengal (see map: The shorter route). The canal will be 300 metres (m) wide and 6 km long in the Adam's Bridge area and 68 km long in the Palk Bay and the Palk Strait area. It will be 12 m deep to enable ships with a draught of 10.7 m to pass through. Dredging of the sea bottom will be done in about 74 km length of the canal.

"The canal project faces the problems of sedimentation, cyclonic disturbances and dumping of the dredged sediments which have not been effectively tackled in the neeri study. neeri neither considered the sediment contribution from the rivers flowing into the Palk Bay nor from the previous cyclones, with the result that the study did not pinpoint the source for 99.4 per cent of the sediment volume in the region," the pmo's note reads. Quoting the meteorological department, it points out that the stretch between Nagapattinam and Pamban is a high-risk zone for cyclones.

The pmo has also highlighted that that the information furnished by neeri about the effects of tsunamis and cyclones was "incomplete" and there were huge gaps in the knowledge about "the sedimentation regimes existing in the various micro regions of Palk Bay". "The environment impact assessment and the technical feasibility report prepared by neeri have ignored these aspects...Going ahead with the construction of this mega project without collecting information on the above aspects could lead to major economic, technical and human problems in future that could border on a disaster," it says.

Sources at neeri say they are not experts on tsunami and related issues and theirs was not the only study to be commissioned by tpt. "There were several other studies ordered by tpt and they will be responding to the queries raised by the pmo. " tpt chairperson N K Raghupathy and the project's superintending engineer V V Ramamoorthy were in Delhi on March 18, 2005 to respond to the pmo's queries. "We have given our replies to the pmo and have cleared all the doubts they raised," claimed Ramamoorthy. But he added that tpt had not undertaken any specific study on the tsunami's impact. In that case, it is a mystery how they managed to answer the pmo's queries satisfactorily, as the latter's main concern was a tsunami-like disaster. "Had the Sethusamudram shipping canal been operational at the time of this (December 2004) tsunami, the currents in the Palk Bay and the associated turbulence would have damaged the canal considerably and would have caused a wide dispersal of the dredged material placed at seas," the pmo's note says.

The pmo's objections to the project comes as a blow to the Dravida Munnetra Kazhagam (dmk) and some other allies in the ruling coalition at the Centre. These parties have been trumpeting the sscp in the run up to the 2006 Tamil Nadu assembly elections. dmk 's T R Baalu, the Union minister for shipping, road transport and highways, had pressured the moef to give it an early clearance. The project comes under Ballu's ministry. But now the pmo's move has put a question mark on the entire process of approving projects like sscp. It has revealed how environmental concerns take a back seat when political pressure influences the decisions of technical bodies and ministries.