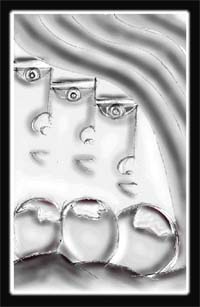 researchers in the us have created artificial human eggs that contain a copy of the mother's chromosomes. Such eggs could be fertilised with the partner's sperm just like a normal egg. Researchers of the Centre for Reproductive Medicine and Infertility at Cornell University, New York, usa, created the eggs. They presented their findings at a conference of the European Society of Human Reproduction and Embryology (eshre) held recently in Lausanne, Switzerland.

This technique could help those women who cannot produce eggs to have children with their own genetic features. Currently the only hope for them to become a mother is to use a donated egg and bear a child that carries the donor woman's genes. "This is preliminary work, but at least in theory it might be a way to provide children for infertile women," said Gianpiero Palermo, who led the research.
All people inherit two sets of chromosomes from their parents -- one from the mother and the other from the father. Normally, all the cells in the body, except for the cells of the sperm and the egg, have two copies of each chromosome. A mature egg contains only one set of each chromosome. When it gets fertilised, it receives the other half from the sperm and then the embryo is formed. Palermo and his team made this process the basis of their technique. In their experiments, the researchers removed the nucleus containing the donor's genetic material from the egg and then injected a normal cell from the mother's ovarian tissue. The cell had a full set of chromosomes, therefore, half of it had to be removed before fertilisation. To do this, the researchers harnessed the natural ability of the egg to make this happen. An electric current split the pairs in half and prompted the egg to expel the unwanted set of chromosomes, making it suitable to receive the chromosome of the sperm. When the team fertilised the egg, the embryo divided once but then collapsed. Despite trying the procedure on more than 150 eggs, in only a handful of cases did any cell division took place.

There are other problems that need to be sorted out before the technology can be used to create human babies. One is imprinting the different molecular patterns on chromosomes that humans inherit from each parent, which are essential for embryonic development. "Imprinting is a little bit of a mystery at the moment," says Orly Lacham-Kaplan of Monash University in Australia.

However, some experts are skeptical that these eggs would not produce healthy babies. They describe the technique as "one step away from cloning." They opine that it would create gross genetic abnormalities. Scientists believe that dna deteriorates with age and fear that the older the cell, the more likely the chance of major defects. They strongly discourage post-menopausal motherhood on ethical and practical grounds. Roger Gosden, a fertility pioneer from McGill University in Montreal, Canada, said the technique was "plausible". Lye Fraser, the chairperson of eshre said that doctors should proceed with caution.

However, Palermo claims that the technique could help many women who can't use their own eggs, either because they don't have any or because their eggs are of no good. Women can lose their eggs as a result of chemotherapy or ovarian surgery. But the fastest growing group of infertile patients is middle-aged women whose eggs have become too old to develop properly. Most of these women can only conceive with the help of donated eggs and are, therefore, not genetically related to their children. Zsolt Peter Nagy, scientific director at the Central Research Clinic of Human Reproduction in Sao Paulo, Brazil, also supports the technique saying that it is potentially one of the most important advances in fertility treatment ever. "I am sure one day this will work," said Nagy. "And if it does, it will be the biggest development after in vitro fertilisation," he predicts.

Robert Edwards, a professor at Cambridge University, the uk , had developed an effective treatment for the problem of infertility due to damaged fallopian tubes in 1978. After this, in 1992, Palermo circumvented the failure of sperm to swim to the womb by injecting the sperm directly into the egg -- a technique called icsi . The problem of egg supply for in vitro fertilisation has been one of the obstacles in fertility treatment since then.