The 76 year old man from Kalburgi who passed away & was a suspected #COVID19 patient has been Confirmed for #COVID19. The necessary contact tracing, isolation & other measures as per protocol are being carried out.

The total number of those infected with the novel Coronavirus (COVID-19) across India rose to 77, after one person in Andhra Pradesh and three more in Maharashtra were identified on March 12, 2020.

The new cases were reported hours after the Union government said there were 73 cases of the novel Coronavirus (COVID-19) in the country.

The three infected in Maharashtra had travelled to the US, Dubai and France. The total number of cases in Maharashtra rose to 14. The Maharashtra government has cancelled all big social gatherings, including fairs, community and government programmes.

There were 62 cases on March 10, news daily Times Of India reported on March 12. The Union Health Ministry, on March 11, said there were 10 additional cases in the country. 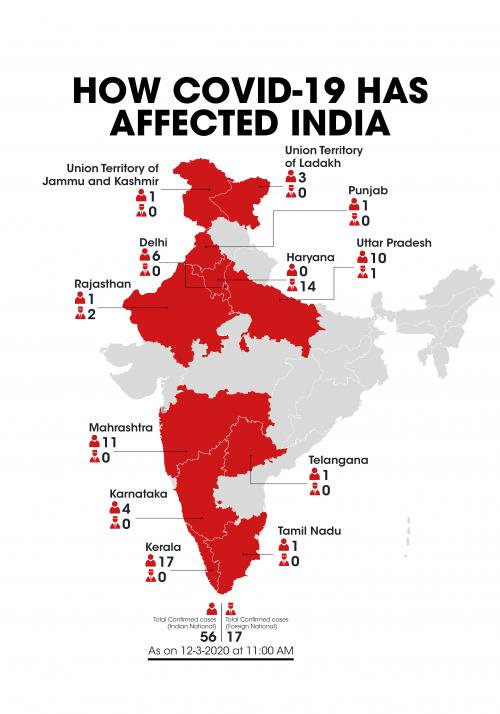 No ministers to go abroad: Modi

Amid the novel Coronavirus outbreak, Prime Minister Narendra Modi said no union ministers will go abroad. “No Minister of the Central Government will travel abroad in the upcoming days. I urge our countrymen to also avoid non-essential travel,” Modi said in a tweet.

Delhi Chief Minister Arvind Kejriwal, on March 12, said all schools, colleges and cinema halls would remain shut until March 31. The measure was taken to prevent the further spread of COVID-19.

The outbreak was “a matter of concern,” Union Foreign Minister S Jaishankar said in the Lok Sabha on March 12, 2020. There was a “need to respond responsibly,” he added.

US bans flights from Europe

United States President Donald Trump, in a nation-wide address, announced the suspension of all flights from Europe, except from the United Kingdom, into his country for 30 days.

India, on March 11, suspended visas for foreign nationals from across the world because of the outbreak, effective March 13.

India is the first among 120 countries to take the drastic step. The country had earlier suspended visas of travellers who were coming in from countries affected by COVID-19.

One more from Ladakh tests positive, man had travelled to Iran; number of confirmed cases in UP at 9

Theatres in Kerala were under lockdown till March 31 due to the COVID-19 outbreak, after eight new cases were confirmed in the state. The total number of confirmed cases were 14.

Italy tightened its nationwide lockdown in response to the rising death toll from the novel coronavirus outbreak, ordering all non-essential shops and services to close.

Announcing the measures on March 11, Italian Prime Minister Giuseppe Conte said supermarkets and pharmacies will be the only retailers to remain open in the country.

The infection rate slowed down in China and the country has passed the peak of the COVID-19 epidemic, according to the country’s National Health Commission.

Beijing announced it will enforce a 14-day quarantine on all international travelers in the Chinese capital, as the number of novel Coronavirus cases outside Asia continues to rise. Beijing reported six new confirmed cases, five of whom travelled from Italy and one from the US.

The number of novel Coronavirus infections in Japan increased to 627 as of 1:30 pm on March 12, after seven more cases were reported earlier in the day.

COVID-19 cases in the Philippines increase to 52

The Philippines confirmed three new COVID-19 cases in the country on March 12, increasing the total infected to 52.

South Korea reported fewer than 120 new coronavirus cases on March 12. Authorities, however, warned that a new cluster in capital Seoul could see the infection spread.

Around 100 people linked to a call centre in the city had tested positive for the virus.

Almost all African governments publicly put in place strict screening at points of entry, especially at airports. Cases of the novel Coronavirus were confirmed in Algeria, Tunisia, Morocco, Egypt, Senegal and Nigeria. All African airlines, except Ethiopian Airlines, cancelled flights to China.

Hollywood couple Tom Hanks and Ruth Wilson tested positive for the novel Coronavirus, the actor said in a Twitter post. Both the actors were in Australia for a film shoot.