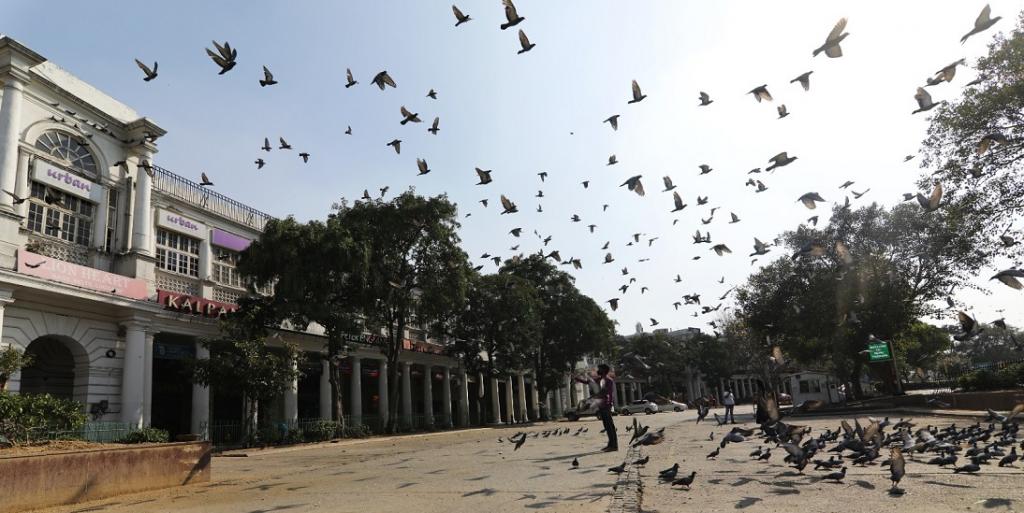 The Economic Survey 2020-21’s highlight was the novel coronavirus disease pandemic (COVID-19) and its impact on health, economy and society and the path to recovery. The first chapter, that traced India’s fight against the pandemic, tried to establish a single point — India got the upper hand in the ‘war’ against a ‘once-in-a-century crisis’ solely through the lockdown.

A complete lockdown was imposed from March 24-May 31, 2020. Following that, there was a partial lockdown for another couple of months.

The survey stated that India imposed the most stringent lockdown (equal to 100 according to the index) for around a period of 40 days from late March to early May. This was when it had around only 500-600 cases. In comparison, stringency in the US was only 72 during that period when it already had a lakh cases.

The survey cited the example of the 1918 Spanish Flu pandemic to argue its point. “The (Indian) response drew on epidemiological and economic research, especially those pertaining to the Spanish Flu, that highlighted that an early, intense lockdown provided a win-win strategy to save lives and preserve livelihoods via economic recovery in the medium to long-term,” the survey said.

Indian officials, either in press briefings or statements elsewhere, gave various scientific arguments to justify the lockdown since April 2020. But they had never cited lessons from the Spanish Flu as the guiding factor to one of the strongest lockdowns the world had ever seen. In fact, the survey talked about Spanish Flu at least 15 times.

The survey said the 40-day lockdown bettered things such as active surveillance, expanded testing, contact tracing, isolation and management of cases and educating citizens about social distancing and masks, etc.

Testing definitely went up. The survey emphatically said, “At the onset of the pandemic in January 2020, India did less than 100 COVID-19 tests per day at only one lab. However, within a year, one million tests were being conducted per day at 2,305 laboratories.”

Other than the RT-PCR test for COVID-19, India also approved rapid antigen testing in late June. The latter was really rapid in that it could give results in an hour or so. This helped testing numbers pick up.

However, the rate of false negative results of rapid antigen tests was quite high. The Centre’s instruction was that if an antigen test returned negative but the person was symptomatic, s / he had to undergo a mandatory RT-PCR test.

The Centre never revealed the breakdown of both types of testing despite being asked to do so. The chapter in the survey that talks about India’s testing strategy comprehensively, is also silent on this.

Despite having the second largest number of total cases, the country has maintained the lowest case fatality rate, the survey claimed. This is true. However, another context to this fact, which is not given here, is that the infection has killed mostly the elderly and in India, those infected the most are the young population.

Union health secretary Rajesh Bhushan, in a press conference December 30, said 60 per cent cases had been reported in people aged 44 years and less. According to the same statement, even though less people were infected in the age group of 65 years and above, the death rate in the group was 55 per cent.

The survey also said India did well despite being one of the most densely-populated countries in the world. With a population of 130 crore and a density of 382 persons per square km, India was expected to be a hub of the disease.

However, not just India as a whole, but even Dharavi, one of the densely-populated places in the world managed to keep the disease at bay, by and large. The policies implemented here, however, were different from what were followed in the rest of the country. There was no consensus among experts as to whether Dharavi’s policies worked or it was serendipity.

The survey also presented a chart titled Management of COVID-19 across Countries (Measured as Actual Cases vis-à-vis Naturally Expected.  In the chart, it is said India has 37.1 lakh less reported cases than what was estimated by the model developed for making the chart. The actual cases in the US are more than the estimated cases by 62.5 lakh cases. 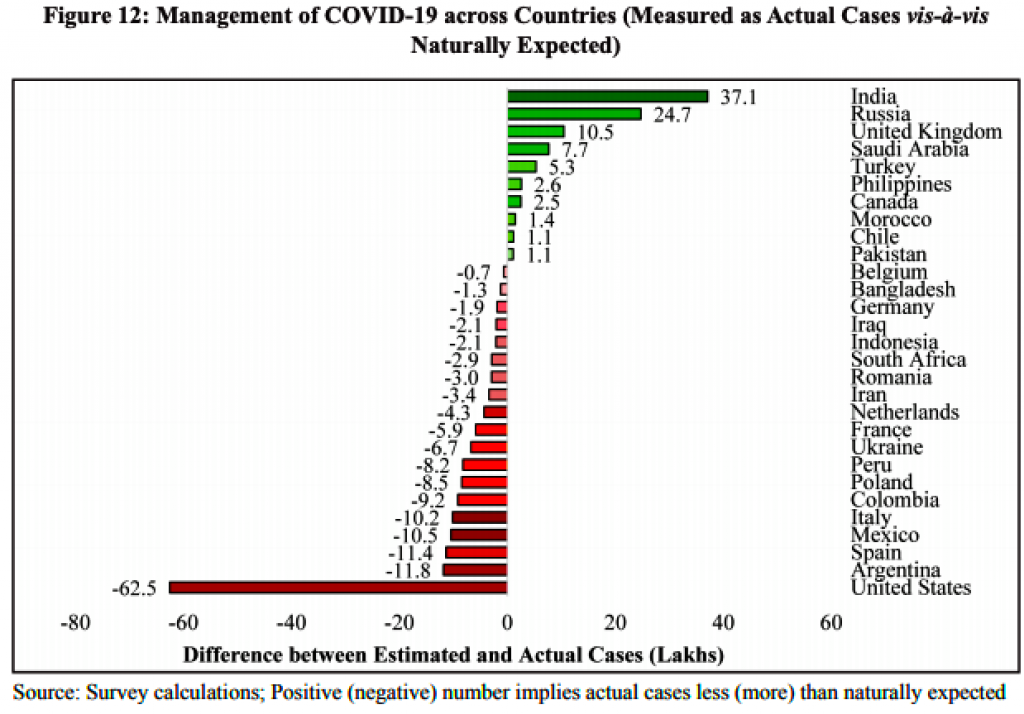 However, India’s own estimate of cases made through two serosurveys, the last being done early May and conducted by the Indian Council of Medical Research, said India had a total of nearly 65 lakh cases by then, while the reported cases through tests were just a little over 85,000.  In fact, an analysis done by T Jacob John, a former faculty member at CMC-Vellore and MS Seshadri said the infections were much higher than what had been estimated in the ICMR serosurvey.

The Economic Survey, thus, argues, “The significant correlation of the difference between expected and actual cases and deaths and the economic variables with the state level stringency index implies that the stringency of the lockdown had a causal impact on these outcomes.” This  fact had been contested by experts even when the government presented three modelling studies in May-end to claim significant impacts of the lockdown.

“The lockdown, in effect, pushed the epidemic curve ahead and gave time to policymakers to build up the testing and health infrastructure to cope up with the increasing caseload once lockdowns were eased — in effect shifting the peak of the pandemic to September,” the chapter said.

“The institutional capacity built during the initial period helped to cope with the peak caseload and sustain the controlled spread after the peak. Among the worst-affected countries, India took around 175 days to reach the peak from its first 100 cases while most countries reached their first peak in less than 50 days. This may have led to overwhelming of their health capacity,” it concluded.

The fact that India has been able to prevent a second wave, so far, has also been attributed to the past gains and it has been hoped that the ongoing vaccination drive will keep it at bay.