Doctors take time off schedules and reach out to 100 migrant families, 400 individuals

Doctors from Odisha who work in hospitals across Telengana are putting their best foot forward in the fight against the novel coronavirus disease (COVID-19) in the state, by not just helping out its citizens in their daily duties, but also distributing relief material for several of Odisha's migrant workers stranded in the state.

There were 945 cases of the disease in the state, with 23 deaths reported, according to the Union Ministry of Health and Family Welfare on April 23, 2020.

Migrant workers from Odisha have been stuck in the state since the nationwide lockdown was invoked to fight COVID-19.

Doctors, under the banner of the Telangana Odisha Doctors’ Association (TODA), have taken time off their busy schedules and so far, reached out to around 100 migrant families and 400 individuals by distributing 650 packets of groceries to them.

Each grocery kit contains five kilogrammes of rice, one kg each of dal, flour, potatoes, onions, salt and chuda (pressed rice), along with half kg each of sugar and cooking oil.

The doctors also distribute other cooking materials including turmeric, chilli and masala powders. Each grocery packet is designed to sustain a family of three or four for at least 15 days.

Volunteers supplied baby food along with the grocery kit to a family that had a nine-month old child, said Sunil Swain, senior surgeon and TODA president.

“We are in the process of finding more such families stranded in Telengana so we can devise ways to help them,” he told Down To Earth.

TODA also procured 1,500 face masks for distribution to them as well. TODA’s preventive medicine members will also educate and train workers to keep themselves and those around them healthy, said Swain.

More than 500 doctors from Odisha were working in different hospitals across Telangana. TODA was founded in Hyderabad on April 1, 2018, on the eve of Odisha’s birth anniversary to help with the medical treatment of those in the state from Odisha. 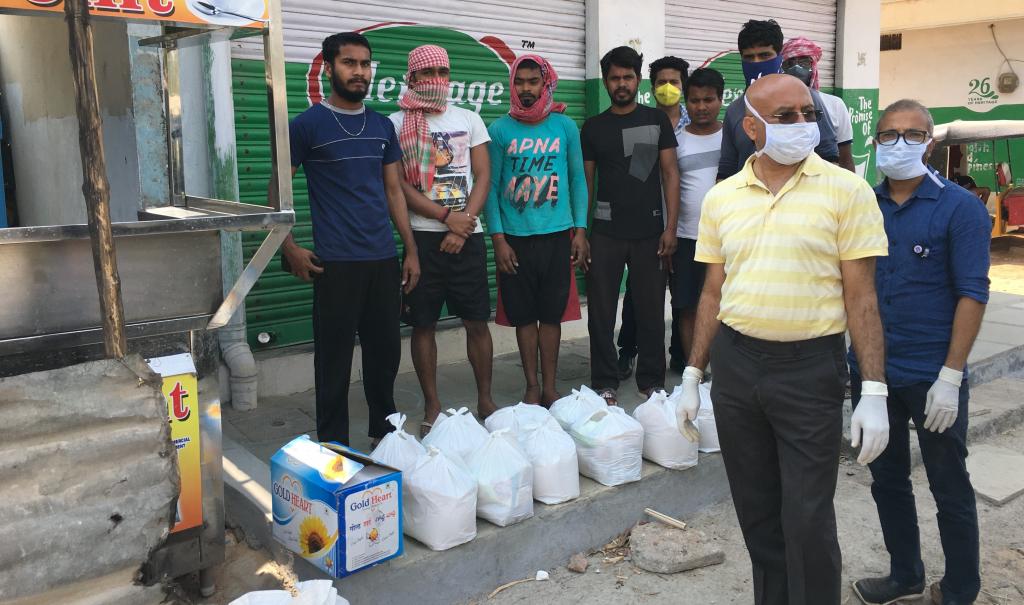 The association — that has over 250 active members now — did similar work among migrant workers during Cyclone Fani in 2019 and had pooled in Rs 4 lakh to contribute to the Chief Minister’s Relief Fund.

The exact number of migrant workers from Odisha stranded in Telengana has not been ascertained yet, but Odisha government officials said they received close to 70,000 distress calls on helpline numbers from the neighbouring state. Subroto Bagchi, the Odisha government’s chief spokesperson on COVID-19, said around five lakh migrants from Odisha who are stranded in other states, may return home after the lockdown was relaxed. The state government announced arranging free transport for their return.

Conservative estimates by non-profits peg the figure of those currently stranded in Telengana, at around a lakh, with a half of them working in brick kilns and construction sites.

“In a city like Hyderabad, around 90 per cent plumbers and 50 per cent cooks in restaurants are from Odisha,” said a migrant from Kendrapara.

While the Odisha government has been coordinating with the Telengana government for food and accommodation of the migrants, the benefits of the efforts have not reached everyone.

Several migrants who interacted with DTE said they were uncertain about their next meal. A large chunk of migrants are still dependent on help from non-profits.

Junior doctors engaged in the fight against COVID-19 at the Veer Surendra Sai Institute of Medical Science and Research (VIMSAR) in Odisha’s Sambalpur district, criticised the quality of food being served to them at the institute’s quarantine facility.

They Junior Doctors’ Association sent a letter to Odisha’s health minister Naba Kishore Das on April 17, 2020 demanding his intervention in providing basic amenities and proper food at the facility.

“Resident doctors are locked up in the facility with no proper food. As the seniors are not involved in caring for patients suffering from COVID-19, they (authorities) are not giving it any importance,” the letter said.

The doctors’ body also complained to VIMSAR principal Braja Mohan Mishra on April 18 about the “sub-standard quality” food offered to doctors on duty.

In a video message, Patnaik warned of criminal action, including action under the provisions of the National Security Act (NSA), would be taken against anyone disrespecting and disturbing them.

The state government will ensure Rs 50 lakh is given to all healthcare workers, private and public, who lose their lives in the fight against the outbreak.

“The state will treat them as martyrs and provide state funerals with state honour,” he said in the video message.

The chief minister said a detailed government scheme will also be initiated to recognise the sacrifice of the healthcare workers, with the conferring of awards on national days.

He said the families of all such government personnel, medical and other support services will continue to receive full salaries till the time of their stipulated retirement.