Close to 800,000 in flood shelters, with some already occupied by returning migrants 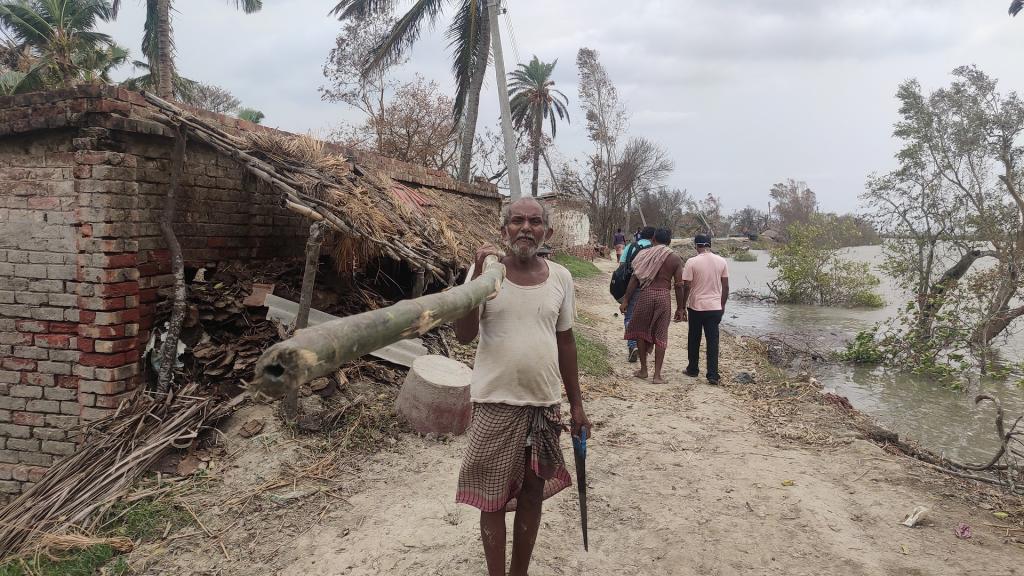 Around 200,000 of those affected by cyclone Amphan are currently under shelter Photo: Gurvinder SIngh

The aftermath of cyclone Amphan in West Bengal, coupled with the return of migrant workers in the state threatens to spread the novel coronavirus disease (COVID-19) to the state’s rural areas, largely unaffected till now.

COVID-19 may spread to the entire state because of the two occurrences, Chief Minister Mamata Banerjee said during a press briefing on May 28, 2020.

Migrant workers — facing long-term unemployment — have been returning home since the announcement of the nationwide lockdown to curb the spread of COVID-19.

More than 200 migrant workers tested positive in several districts, particularly in the rural areas of Howrah, Malda, Hooghly, Uttar Dinajpur, Birbhum, Murshidabad and North 24 Parganas till May 27, according to a senior official of the state health department.

Sources in the railways said 42 shramik (labour) trains entered West Bengal so far, ferrying about 50,000 migrant workers, while many more were in the pipeline. “The number of positive cases is only bound to increase with so many migrant workers returning to state,” said a state official.

Cyclone Amphan — that struck on May 20 — has compounded worries as those affected rushed to relief shelters, making social-distancing (a primary measure to counter the disease spread) irrelevant.

Close to 800,000 were in flood shelters for days, when the cyclone had struck south Bengal. The cyclone hit the Sundarbans region in Bengal and affected eight districts in the state, causing significant damage, including levelling countless homes. Around 200,000 of those affected by the cyclone are currently under shelter, according to the state’s disaster management department.

The state administration has found it increasingly difficult to get space for sheltering those affected by the cyclone, as many shelters already house several migrant workers — who were reaching the state since the first week of May — were under quarantine.

“Though we have provided hand sanitisers and masks and asked for social-distancing, one can imagine the challenge under this situation,” said state disaster management minister Javed Ahmed Khan. 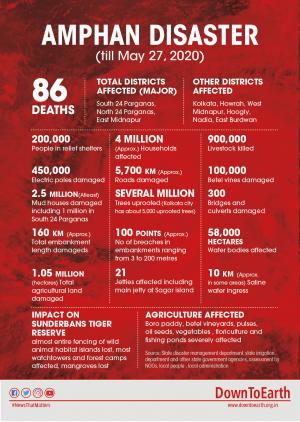 The cyclone’s impact has increased the scare from COVID-19, said Santanu Sen, a Member of Parliament from the ruling Trinamool Congress.

“When there is an immediate threat like Amphan, people tend to forget other threats like COVID-19. The cyclone has put social distancing out of consideration,” he said.

Thousands of people were cramped for days in relief camps, where it is impossible to maintain social-distancing, said Manas Gupta, physician and senior member of the state’s Association of Health Service Doctors.

“It definitely adds to the possibility of viral spread, especially since the affected districts — South 24 Parganas, North 24 Parganas, Kolkata, Howrah and Hoogly — are red zones, with significant COVID-19 cases,” he said. Malda, Bankura, Purulia and Birbhaum districts, all of which were green zones have now become red zones as the number of cases increased.

The association also claimed the cyclone may increase the “possibility of outbreaks of diarrhoea, dysentery, other infectious diseases and snakebites”.

The threat of the infection spreading from migrants returning home has increased the trading of charges among the state’s political leaders.

Banerjee alleged the railways did not discuss finalising schedules of in-bound trains with her administration and claimed the state’s health infrastructure may break down with thousands of migrants coming back. She singled out Maharashtra, which has the highest reported cases in the country.

Migrants were also coming back to Bengal from other affected states, including Gujarat, Delhi, Madhya Pradesh and Tamil Nadu: All significantly affected from COVID-19.

“We have almost controlled the spread. Lakhs of people, however, have started to come back. They are our people and will definitely come back. But what will we do if we find 25 per cent of them are positive?” asked Banerjee during a briefing.

The onus lay squarely with the state, Dilip Ghosh, the state Bharatiya Janata Party chief, told Down To Earth.

“Due to Amphan, the state requested not to send trains till May 25 because of which they are now coming,” he said.

“If Uttar Pradesh could handle so many migrants together, why can West Bengal not do it? The Bengal government has been an utter failure in addressing COVID-19 and is now trying to shift the onus to the Centre,” he added.

Sen accused the Union government for a “complete lack of planning”, adding that it was responsible for the situation.

“They imposed lockdown at a four-hour notice and did nothing in the first few weeks,” he said.

“Once pressure mounted as the images of migrant workers walking thousands of miles emerged, the Union government suddenly started sending workers packing to states. It seems like a political ploy to disturb the state government,” he added.

The total number of reported cases in the state are at 4,536, with 295 dead and 1,668 cured, according to the Union Ministry of Health and Family Welfare on May 29.