CDSCO official says BB vaccine to be used in public but to exclude people with COVID-19, other infections

Photo: Down To Earth

The Drug Controller General of India announced approval for the restricted emergency use of the novel coronavirus disease (COVID-19) vaccines manufactured by Bharat Biotech International Ltd and Serum Institute of India January 3, 2021. However, key questions about the efficacy results of the former remain unanswered.

VG Somani said the Central Drugs Standard Control Organisation (CDSCO) had accepted the recommendations made to it by the subject expert committee (SEC) appointed by the organisation January 1 and January 2.

The SEC had recommended emergency use of the SII-Astra/Oxford vaccine January 1, followed by Bharat Biotech’s Covaxin the next day.

“Phase 1 and Phase 2 clinical trials were conducted in approximately 800 subjects and the results have demonstrated that the vaccine is safe and provides a robust immune response,” Somani said while reading his statement about Bharat Biotech.

“The Phase 3 efficacy trial was initiated in India among 25,800 volunteers. Till date, approximately 22,500 participants have been vaccinated across the country and the vaccine has been found to be safe according to the data available,” he added.

The statement did not say what exactly was the “available data” of Phase 3, that would have hinted at large scale efficacy. 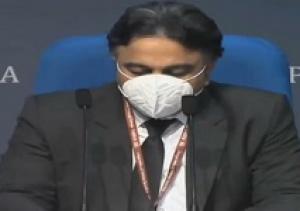 Phase I of the Covaxin trial, involving 380 participants, was done to assess the safety of the vaccine. Phase 2, in which 375 people were recruited, was done to find out if the vaccine had enough immunogenicity or desired immune response.

However, all drug regulars across the globe have looked at the interim data of large-scale Phase III trials in which tens of thousands of participants were recruited to understand efficacy on a large scale. Subsequently, the regulars have granted permission for emergency use.

Neither Bharat Biotech nor the Indian Council of Medical Research (co-sponsor) of the vaccine have claimed anything about efficacy so far.

Efficacy was absent from Somani’s statement on Bharat Biotech. He also did not take any questions from the media. A senior CDSCO official confirmed the efficacy data was still being generated on the side lines of the press meet where Somani made the statement.

He was asked by journalists about what the phrase ‘clinical trial mode’ meant. It had been used with regard to the Covaxin approval by Somani January 3 and the Union health ministry January 2.

The vaccine would be used in a very limited number, he said, in reply.

The official was queried as to whether Covaxin would be administered to common people. He replied in the affirmative.

However, he qualified: “All beneficiaries taking Covaxin will have to sign an informed consent form. Also, the beneficiaries would have to meet the inclusion exclusion criteria of the trial.”

People who have had COVID-19 are excluded from the trial, according to the criteria registered on the Central Trial Registry of India.

There is a lot of other exclusion criteria of the trial that comprises people with infections like HIV and hepatitis, pregnancy, upper respiratory infection or gastroenteritis within three days prior to each dose, severe and / or uncontrolled cardiovascular disease, respiratory disease, gastrointestinal disease, liver disease, renal disease, endocrine disorder and neurological illness, among others.

Thus, if the statement of the CDSCO official is to be believed, people satisfying the exclusion criteria will not be given Covaxin.

There is no official statement, on this yet.

The CDSCO official also said if an adverse event happened after vaccination, the company — Bharat Biotech — would be accountable.

Neither Somani nor any other official also clarified as to what phrases like ‘abundant precaution’ and reference to mutant strains meant in the context of Covaxin approval. These were used by Somani January 3 and by the government statement January 2.

The CDSCO official, who spoke on the sidelines, nonetheless stressed that Covaxin was necessary in the wake of the UK mutant strain.

Covaxin uses an inactivated virus platform. It will inject inactivated or killed virus in the body against which the immune system triggers a response. The Moderna Inc and Pfizer Inc vaccines, on the other hand use messenger Ribonucleic acid (mRNA) platform that has spike protein.

The United Kingdom recently reported a mutation in the S gene found in the RNA of the virus. Thus, Somani repeated that Covaxin would work better in the case of mutations.

Somani, however, added that the third phase trial, the recruitment of trial participants for which is still going on, will continue.  The two doses of the vaccine will be given 28 days apart.

Bharat Biotech, in a separate statement issued January 3, welcomed the move and claimed that the Phase 1 and Phase 2 data from 1,000 participants was encouraging.

The number is in excess by more than 200 as Somani referred to “approximately 800” participants in these phases.

The firm claimed that Phase 1 and 2 data had been sent for publication in the peer-reviewed journals.

Covishield is a two-dose vaccine that the Indian regulator has approved for restricted emergency use. The minutes of the SEC meeting have not been made public yet. But sources said the second dose would be given 4-6 weeks apart.

Somani said the SII submitted the details of the efficacy data of the trial conducted on 23,745 participants overseas.

“The overall vaccine efficacy was found to be 70.42 per cent. Also, Serum was granted permission to conduct Phase-II / III clinical trial on 1,600 participants within the country,” Somani said.

“The firm also submitted the interim safety and immunogenicity data generated from this trial and the data was found comparable with the data from the overseas clinical studies.  The clinical trial ongoing within the country by the firm will continue,” he added, without giving details of the Indian study.