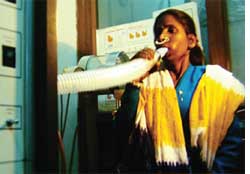 monitoring asthma over the Internet? Possible, say researchers of iit Bombay a private company in Bangalore. They have developed a portable spirometer. The instrument measures the volume of air inhaled and exhaled by the patient and can be connected to a computer to send data online to a doctor. Its use, however, is limited lack of trained personnel in the country.

This is the first spirometer that allows the use of the Internet to send data to a doctor elsewhere, the researchers say. "Internet has reached smaller cities and towns in India but there are very few specialist doctors. The aim of developing the portable spirometer was that its use could be widespread even if a doctor is not at hand," said Vivek Agarwal of iit Bombay and one of the authors of the study. Other than receiving data, the doctors can interact with patients online and instruct them. The instrument uses an embedded web server.

It has a pressure sensor built into the mouthpiece, which registers airflow. This information is amplified and digitized. The results can be read on the spirometer's screen or transferred to a computer or loaded online onto the webserver. A doctor needs to log into a website to access his patient's information. An added advantage is that the data is presented in a form that helps the doctor analyze it easily. The data is also saved at the spirometer's web server and can be downloaded by the doctor when needed. As the instrument is portable, it can be taken to the patient by the trained health worker.

In the study, published in the International Journal of Biomedical Engineering and Technology (Vol 1, No 4), the authors estimated that making spirometer would cost us $80. The spirometer also has a power down mode to save battery power. Whether the market for such an innovation can be tapped needs to be seen. "It will take time for the spirometer to evolve as a functional device," Agarwal says.

S K Chhabra, physician with the Vallabhbhai Patel Chest Institute, New Delhi, stresses technical expertise. "Spirometers are not used enough due to lack of trained technicians. Hence the data sent online has little value. A portable spirometer will not help the situation," he says.