Is a cure for premature menopause in sight? 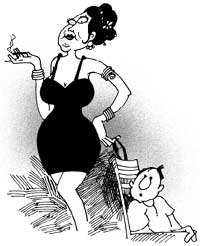 a significant step towards halting the ageing process has just been achieved at least for women. Jonathan L Tilly of Vincent Center for Reproductive Biology at Massachusetts General Hospital (mgh), Boston, usa , and his team report that they have engineered mice whose ovaries grow viable eggs and secrete oestrogen even at an advanced age (mouse equivalent of human centenarians).

The experiments were carried out by Tilly and his colleagues at mgh along with Stanley J Korsmeyer of Dana Farber Cancer Center and associates at the Washington University in St Louis and the University of Maryland. The group was able to arrest what had seemed an immutable law of mammalian nature - inexorable depletion of ova or egg cells.Ovaries in all mammals obey a strict genetic command that causes ova to die at a steady rate throughout the lifespan until the supply is depleted ( Nature Genetics , Vol 21, No 2).

Indications are that the geriatric mice maintain a strikingly youthful character without evidence of harmful estrogen-related effects. Their uteruses resemble those of much younger animals instead of the shrunken organs of normal-aged mice. The researchers were surprised to find that all it took to forestall the normal ageing of ovaries was to disable a single master gene, called bax, which controls the rate of cell death.

The researchers knocked out the bax gene in mouse embryos, creating a gene defect that seemed to produce no harmful effects in the animals later in life. In fact, they live longer than normal mice. Egg follicles continued to develop in the ovaries of the 'bax-less' mice as late as 22 months - ancient by mouse longevity standards. However, the females did not become pregnant when caged with male mice, which Tilly thinks is due to shutdown of sex hormones from the pituitary gland in the brain. But when the researchers removed the eggs from their geriatric mice, they found they were capable of being fertilised in the test tube and of growing into normal-appearing embryos.

The new mouse strain, however, does not open the door to geriatric motherhood. One major reason is lack of certain hormones needed to sustain pregnancy in these aged animals. More importantly, as the ethical ramifications of inducing menstruation in older women are widespread, scientists are yet to try the same experiments on humans.

Nevertheless, these findings will certainly lead to treatments to preserve fertility in women who undergo premature menopause due to chemotherapy treatment, for instance.