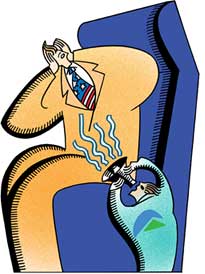 in what looks like a diplomatic offensive to protect toxic trade, us -based Afton Chemicals has lobbied hard with the American government to mount pressure on European regulators to prevent the proposed ban on its product, Manganese Tricarbonyl Methylcyclopentadienyl (mmt).

Afton, producer of fuel and lubricant additives, has introduced mmt, a very harmful octane enhancer for petrol, to replace another harmful octane booster tetraethyl lead. Both are neurotoxic metals produced and sold by the same company.

The International Trade Administration of the us has sent a missive to the European Ministry of Economy, pleading Afton's case.The letter from Paul Dyck, deputy assistant secretary for Europe, urges eu member states to "give serious consideration to the European Commission's proposal and support science-based testing protocols for all fuel additives, including mmt." The letter pleads that "while mmt is permitted and used in certain eu member states, Afton is concerned that the proposed amendment would lead to prohibition of mmt throughout Europe".

The draft report of the committee on the environment, public health and food safety of the European Parliament proposes that "the use of metallic additive mmt in fuel shall be prohibited from January 1,2010 onwards. The committee shall develop a suitable test methodology concerning the use of metallic additives in fuel other than mmt." It reasons that use of this and other metallic additives is very damaging to the environment. mmt can easily be replaced with less damaging substances. Europe is concerned that some of the countries that have recently joined eu are using mmt to improve poor quality petrol imported from Russia.

Denmark, Germany, Latvia and Sweden have come out in support of the proposed ban on mmt. A pre-eminent group of European health experts has written to the ministers of environment and health in the eu member states in support of banning mmt. They have argued, "Evidence from France, Canada, the United States, Mexico, Bangladesh, and other countries strongly suggests that manganese exposure through inhalation and drinking water can damage brain development in children and permanently impair motor control and behaviour in adults. In Italy and Canada, environmental exposure to manganese through industrial and traffic emission has been linked to an increased risk of Parkinsonism among exposed populations."

The Brescia Declaration on prevention of the neurotoxicity of metals states "the likelihood that addition of manganese-based additive in petrol could cause widespread developmental neurological toxicity similar to that caused by the lead-based additives now banned nearly worldwide."


The International Trade Administration is backing mmt even though it has been virtually eliminated in the us market. mmt is legally banned in the reformulated gasoline that forms two-thirds of the us fuel market. Even in the regular gasoline its use does not exceed 1 per cent. The us refiners have volunteered to stop its use in response to public outcry. California has banned it completely. Moreover, despite repeated efforts Afton has failed to convince the environmental arm of the us government, the Environmental Protection Agency, that mmt is safe.

In fact, the use of the manganese additive in petrol was prohibited by the us Congress in 1977 until a court in that country ruled against the ban. Despite attempts, a legal ban could not be enforced again because of trade laws and a narrow scope of regulations.

The 'not in my backyard' syndrome of the commerce arm of the us government can seriously harm the cause of public health in other countries, especially developing countries in Asia and Africa that, after phasing out leaded petrol, are finding it even harder to stave off the threat of invasion of other harmful metallic additives.

In Asia, India has taken the lead to stop the use of mmt. Indonesia has also decided not to use mmt. China tried to ban its use in 2004 but came under pressure from industry. Beijing has now taken the first step towards capping its blending to less than 6 gm/litre--much lower than the practice. Vietnam is trying to resist its use.

It took decades for the world to understand and counter the lethal effects of lead and by that time a lot of damage had been done. With mmt there is still a chance to avoid the historical mistake.