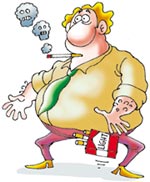 Mild cigarettes are drawing strong reactions in the European Union (eu). In tune with its campaign against smoking, the eu has ordered manufacturers not to brand their products as "mild" or "light". It is felt that such tags lead consumers to believe that the cigarettes are less harmful. The implication of the directive is that brands like Marlboro Lights and Mild Seven, produced by Philip Morris International and Japan Tobacco, respectively, will not be sold in eu markets under the same names. In addition, health warnings such as "smoking kills" will have to be given at least 30 per cent of the space on the front portion and 40 per cent on the back of each cigarette packet.

Cigarette firms have had enough time to phase out the old products, since their attempt to obstruct the new rules failed at the European Court of Justice in 2002. British American Tobacco has already changed its Lucky Strike Lights brand of cigarettes to Lucky Strike Silver. What impact such changed brand names would have on consumers' buying habits remains to be seen. Chris Procter, head of science and regulation at British American Tobacco, contends: "...There is potential they might change to a higher tar brand."