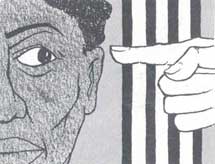 THE US National Institute of Health (NIH) has halted grant to a conference on 'Links between genetic disposition and criminal behaviour', following complaints that the conference might be a covert attack on African- Americans, who constitute 46 per cent of prisoners in USA.

The conference on genetic factors in crime, scheduled for October in Maryland, USA, was described as racist by critics on two talk shows on a cable network. Following the shows, NIH received dozens of protest calls from minority groups and decided to temporarily freeze the grant of more than US$ 1,00,000 to the conference organiser, the University of Maryland Institute for Philosophy and Public Policy.