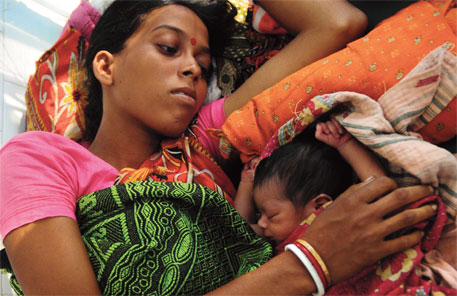 SUPER SPECIALTY B C Roy Children’s Hospital in Kolkata looks like a refugee camp. A sit-out for families inside the complex is roofed with plastic in bright shades of blue, red and green. The sheets protect families from the regular monsoon downpour. The not-so-lucky ones huddle under buildings when it rains and curl to sleep on benches under a clear night’s sky.

Early September, the hospital hit the headlines as 52 children died within a week. Most were less than a year old and grossly underweight. They were admitted to the hospital with birth asphyxia, acute respiratory distress and septicemia. Official response to the deaths was defensive. “They happened because terminally ill children were referred here,” says Tridib Banerjee, chairperson of the high-level task force set up by the West Bengal government in 2011 after 21 children died here within three days. “Everyday four to five children die here. The number was more this time because more children were admitted,” he adds. Satish Tiwary, principal secretary, health, and Sanghamitra Ghosh, National Rural Health Mission (NRHM) commissioner did not respond to queries from Down To Earth. 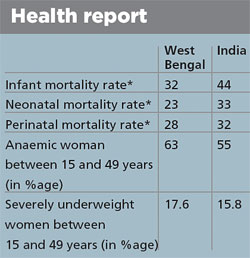 The hospital gets over 800 children in its outpatient department every day, of which about 70 get admitted. Ailing newborns are brought from far-off southern Bengal districts—Howrah, South and North 24 Parganas, East and West Midnapore, Nadia and even Murshidabad, which is over 250 km away. To cater to the rising number of patients, the hospital added 200 beds and started a 100-bed sick and newborn care unit (SNCU). Better facilities meant more children being referred, and more deaths.

In August 2013, of the 890 admitted, 122 children died. Last year, in August itself, 110 children died of the 787 admitted. There is little disagreement among health experts that the hospital has come a long way since 2004 when four children died for want of oxygen cylinders. The government, too, initiated steps to improve healthcare infrastructure by setting up 36 SNCUs in different districts. But this has not prevented the rush to B C Roy hospital.

Sheikh Ijajul Haq’s child did not cry after birth. Doctors at the North 24 Parganas district hospital referred him to a medical college in Kolkata. Haq travelled 80 km and reached B C Roy hospital instead. It has the best facilities. For the past one week, he has been patiently waiting for the child’s recovery, lucky to find a place under the plastic sheets.

Not many months ago, 16-year-old Mamata Tanti of Hasnabad was administered injections to induce labour pain by a quack. When she started convulsing, her parents took her to the sub-divisional hospital at Basirhat, an hour’s ride away. The hospital referred her to a Kolkata state general hospital, a five-hour journey. On her way to the hospital, the girl delivered a still-born.

Most patients in rural parts of the state run helter-skelter for want of good heathcare facilities. Against the need for 2,166 primary health centres (PHCs), the state has only 909. In North 24 Parganas, most PHCs have beds and a labour room but do not admit patients because they do not have staff. Only 26 per cent of the PHCs in West Bengal function round-the-clock compared to 53 per cent in India. Doctors and nurses usually live at far-off places and travel two to three hours to reach PHCs so, the centre closes by early evening.

There is also a shortfall of specialist doctors, both gynaecologists and paediatricians (see ‘Doctors’ shortfall’).

Taki rural hospital handles only normal deliveries. For, none among the four doctors is either paediatrician or gynaecologist. Next to the maternity ward, two incubators gather dust. The last caesarean delivery in the hospital was over a decade ago, a paramedic staff says.

“Unless we improve maternal nutrition, the rush of referrals and infant deaths will continue,” says a senior paediatrician at B C Roy hospital who did not wish to be named.

Setting up SNCUs across districts is not enough; the need is a safe delivery environment, more institutional deliveries and control over anaemia among mothers, he adds. 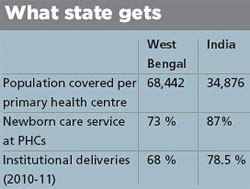 NRHM-3 states 63 per cent woman in West Bengal have mild to severe anaemia, compared to 55 per cent in India.

“Women in North 24 Parganas get married between 16 and 18 years. Due to anaemia and low body weight among pregnant mothers, premature delivery is common,” says Tamajit Goswami, doctor at Ghola PHC in Hasnabad block.

Centre’s scheme to tackle malnourishment has also not bared result. Nineteen-year-old Mamoni Mistri, admitted to a PHC in Minakha block is nine months pregnant and expecting her second child. At 55 kg she is underweight and with 10 gram/decilitre haemoglobin, mildly anaemic. She is not included in the Centre’s flagship scheme, the integrated child development scheme, or ICDS, as she is visiting her parents’ house for the delivery. It provides supplementary nutrition to children, and pregnant and lactating mothers. According to the latest ICDS figures, only 76 per cent of the sanctioned ICDS centres in West Bengal provide the service. The all-India average is 89 per cent. As per NFHS-3, only 25 per cent pregnant women receive any form of supplementary nutrition from anganwari centres in rural areas.

“The performance of ICDS is worse than what data shows,” says Anuradha Talwar, adviser to the Supreme Court commissioners for Right to Food. “The centres only serve food. There is no growth monitoring, health check-up or mothers’ counselling. It is common to fudge data and show lower number of severely malnourished children.” Sixteen-year-old Piya Mandal was enrolled in an ICDS centre. Barely 45 kg the day she delivered her first child, Mandal says khichdi and an egg every alternate day does not suffice for a meal. In the seven months of her pregnancy she gained only 2 kg. Small wonder, her child weighs under 2 kg.

“A lactating mother needs 3,600 calories per day. The government conceived ICDS as a supplementary nutrition scheme, but it has become the principal meal for mother and child,” says Rezaul Karim, professor, Sagore Dutta Medical College and Hospital, Kolkata.

Like B C Roy hospital, many tertiary facilities in the state witness regular child deaths. Malda district hospital in north Bengal is another hotspot for terminally ill children of neighbouring districts and Bihar, Jharkhand and even Bangladesh. Here, over 350 children have died in the past three years. As many as 36 died in January and 16 in May this year. Reasons for the deaths are similar to that at B C Roy hospital, says Vinod Tikoo, member of National Commission for Protection of Child Rights. “There is a need to decongenst apex hospitals by increasing beds and doctors at PHCs. Pregnant women should be given better dietary inputs and take-home ration,” he says.

A primary evaluation of service delivery under the NRHM