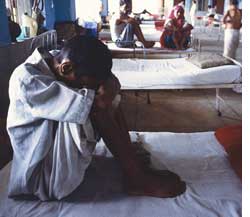 INDIA contributes 20 per cent of the global burden of new tuberculosis cases. In 2008, 1.8 million people died from TB including half a million deaths associated with HIV worldwide, said a 2009 WHO report.

The role of BCG vaccination in TB control remains controversial. Its efficacy varies from region to region and protection is restricted to childhood tuberculosis—rarely infectious. Neither does it have much impact on infectious adult tuberculosis, nor does it play any role in quelling the increasing burden of HIV-related TB; the HIV virus terminates any immunity conferred by the vaccine.

Progress in global TB control in the past decade has been due in large part to widespread implementation of the DOTS (Directly Observed Therapy, Shortcourse) strategy; but it has failed to eradicte TB completely. Complex treatment of multidrug resistant TB, extensively drug-resistant TB, HIV associated TB are disadvantages of the treatment. “Reason for its incomplete success can be blamed on patients’ ignorance as they leave the medication midway and aggravate the problem by developing more resistant strains and infecting more individuals,” said Rajesh Chawla, senior consultant at the respiratory unit at Indraprastha Apollo Hospitals in New Delhi.

Some people are more susceptible as compared to others when exposed to Mycobacterium tuberculosis and this has sparked new research. Lalita Ramakrishnan and her colleagues from the University of Washington in USA reported in Cell, on March 5, on genetic differences among individuals in levels of an immunity enzyme (LTA4H). People who carry two versions of the enzymeencoding gene and so produce more of the enzyme are least susceptible to TB.

In a second study in the same issue of Cell, Kanury Rao and his colleagues at the International Centre for Genetic Engineering and Biotechnology in India uncovered 275 factors in a human cell which interact with bacteria, leading to infection. They described the machinery within human macrophages—defence cells primarily targeted by the TB bacterium.

This brought some facts into light: the location where mycobacterium invades the host and also that infection tactics vary with different strains. The very researchers are now seeking ways to manipulate the host machinery rather than targeting the pathogen. “DOTS aims to kill the bacteria, whereas our strategy would prevent an infection in the host cell,” Rao said.

“While DOTS does not work on drug resistant bacteria, our approach will work well on it. Both strategies can be combined to shorten the treatment time and minimize drug resistance,” he added. “Although it has potential for treatment of drug-resistant TB, more work is required,” said Ramakrishnan.