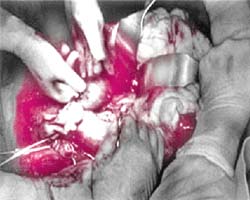 researchers at the lds Hospital, John Hopkins University, and the Washington dc Hospital Center have unearthed new evidence that a number of infectious bugs - including hepatitis a and herpes simplex virus types 1 and 2 - are strongly associated with heart attacks and cardiovascular death. In a major new study of nearly 900 heart patients, researchers at these three centers found a significant association between infectious viruses and bacteria and risk of heart attack or cardiovascular death. Specifically, they found that the more infectious agents that patients are tested positive for, the more likely they were to die of a heart attack (Circulation, Vol 101, No 3).

"The results of this study add further evidence that infection plays an important role in cardiovascular disease and cardiovascular death," said the lead author Joseph B Muhlestein, director of lds Hospital's Cardiac Research Laboratory. Researchers from the three centers presented their data at a recently held meeting of the American College of Cardiology international meetings in Anaheim, ca. In previous studies, researchers have connected one infectious germ - a respiratory virus known as Chlamydia pneumoniae - with coronary artery disease, but this is the first prospective study of its kind to link multiple infectious bugs with an increased risk of cardiovascular death.

"This study confirms the idea that a variety of infectious agents are at work in this process and that cardiovascular disease may not be linked to just one bug as was originally hypothesised," says Muhlestein. Researchers from the three centers studied the connection between six infectious agents and the risk of mortality for the 890 patients in the study and then adjusted for other risk factors. Patients were then studied for three years. They found that the mortality rate for patients who tested positive for all six agents - cytomegalovirus (cmv), hepatitis a, herpes simplex virus types 1 and 2, Chlamydia pneumoniae and Helicobacter pylori - was 6.5 times higher than it was for patients who had no evidence of virus or bacterial infection. The researchers found that the mortality rate for these patients essentially rose in relation to the number of infectious agents that they tested positive for. Patients with three bugs were more than three times likely to die than those who did not have an infection.

Another independent study from Finland claims that chronic infection with the herpes simplex 1 or chlamydia virus can increase the risk of developing heart disease adding to a growing body of evidence suggesting infections may play a key role in the development of several chronic diseases - including heart disease - later in life. Merja Roivainen of the National Public Health Institute in Helsinki, Finland, and colleagues claim: "It may well be... that a process that eventually leads to coronary heart disease is initiated in early life after infections acquired in childhood." The researchers report that two chronic infections, herpes simplex virus-1 and Chlamydia pneumoniae, increase the risk of coronary heart disease.