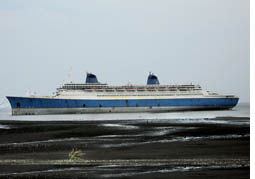 new evidence has emerged showing that the Norwegian ship Blue Lady sent to India for dismantling may have radioactive material on board. Tom Haugen, former project manager of the ship (formerly known as SS Norway), recently submitted a letter in this regard to the Committee of Technical Experts (cte) set up by the Supreme Court.

Haugen, in the letter, claimed that "the ship has radioactive material Americium 241 on board in at least 5,500 fire detection points. Removing or handling of radioactive sensors with Americium 241 element has to be done by skilled persons..."

The ship is currently anchored 4,000 feet off the Alang coast in Gujarat. M V Ramana, senior fellow of the Centre for Interdisciplinary Studies in Environment and Development in Bangalore, says, "Inhaling Americium dust increases chances of cancer."

Platform on Shipbreaking, a consortium of labour and trade unions, has questioned the clean chit given by cte for the entry of Blue Lady into the Indian waters. Questioning the committee's report, the consortium alleged that permitting the ship to dock at the Indian coast could prove disastrous.

Responding to Platform on Shipbreaking's questions, the Supreme Court on July 26, 2007, asked the Gujarat Pollution Control Board to explain if the board violated the court's October 2003 directive by allowing the ship to anchor at Alang and then emptying oil from it.

A Supreme Court order in 2003 mandates that all ships need to be decontaminated before they reach Indian shoreline. It is essential that the quantity of hazardous and non hazardous material on board be revealed to the authority concerned. On June 5, 2006, the Supreme Court allowed the toxic ship to anchor at Alang on humanitarian grounds.