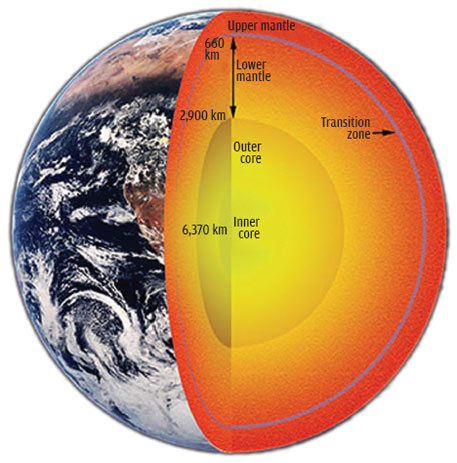 Earth's mantle could turn out to be the single largest water reservoir on the planet. Deep pockets of magma have been found 600 km beneath North America in the transition zone (see diagram). Magma gets formed due to melting of rocks and water is crucial to this process. The new find indicates it is the surface water that gets pushed to such great depths due to tectonics. The water found at these depths, however, is not in liquid, ice or vapour form. Due to severe pressure and high temperature, water molecule splits to form a hydroxyl radical (OH) which gets attached to minerals in rocks. It is not known yet whether the phenomenon is uniform throughout the planet, but the discovery could give clues to the formation of Earth, volcanic eruptions, the presence of water on Earth's surface, and even alter current theories on Earth's composition. Science, June 13