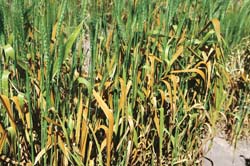 spores of a new variety of black stem rust may reach India from Uganda and hit most of the wheat crop soon. The alarm was raised by the international crop protection body Global Rust Initiative (gri) and the International Maize and Wheat Improvement Centre, better known by its Spanish acronym cimmyt, but is being contested by Indian wheat scientists.

This new pathogen is called ug99 in Uganda. A variant of the Puccinia graminis fungus, ug99 has been popping up in fields throughout East Africa and has made an entry into Yemen and Sudan (see 'Nautical miles away', Down To Earth, February 28, 2007). Scientists tracking similar spores say it will first be blown into Egypt, Turkey and Middle East and then Pakistan and India.
Nobel laureate Norman Borlaug has been warning the world not to get complacent. "We are too complacent to admit that this could be a calamity after all," he says. The last stem rust epidemic had hit North America in 1954, wiping out 40 per cent of the crop. Borlaug then began work in Mexico to develop stem-rust-resistant wheat. The project grew into cimmyt, which made the rust-resistant high-yielding wheat variety and won Borlaug the Nobel peace prize in 1970.

At 93 now, Borlaug says it was a mistake to dismantle wheat testing programmes worldwide by being over-confident that the rust wouldn't strike back.

In a warning report Bolraug notes that most wheat currently being grown around the world has either established susceptibility to the new pathogen or has unknown susceptibility. cimmyt projections say that in Africa alone losses from such blights could be around us $1 billion.
B Mishra, project director of the Directorate of Wheat Research in Karnal, Haryana, says India is ready to fight the spores if and when they come. The laboratory of the Indian Council of Agricultural Research (icar) in collaboration with cimmyt and gri has started testing its own germplasm varieties in Africa and Kenya to gauge their resistance capabilities.

Any results? "It takes years to make crosses and then we develop stabilised genotypes, which are then put to tests in the fields," he says.

Historically, widespread stem rust epidemics have been reported in India and Pakistan but after the Green Revolution, there has been no report of significant losses.

Ordinarily, stem-rust spores move only short distances, one stem infecting another as they brush against each other. But ug99 makes five distinct types of spores, of which the urediniospore is especially infectious and unique in its ability to ride air currents. Winds can carry these spores over thousands of miles and this could pose a challenge for India and Pakistan, says Borlaug.

About six months ago, there were rumours of an outbreak of stem rust in the coastal areas of Sindh in Pakistan. "No evidence was found. Similar rumours were also spread in India. But India is lucky in that it has a mosaic of variety in wheat lines," Mishra says.
However, he also says that while 22 released varieties of wheat genetic stocks sent for testing in Kenyan hotspots were found resistant in the first year of outbreak of ug99, the very next year many of them were found to be susceptible. So what will India do if the spores crosses its borders?

"We would have developed some resistant varieties by then," he says. According to Mishra, black rust is 'not important' for India now because it has almost vanished through years of resistance breeding.

"In any case, only central and peninsular Indian zones produce wheat susceptible to black rust."

The highest producing zone--Haryana, Punjab, plains of Jammu and Kashmir, western Uttar Pradesh and Uttarakhand--get yellow rust infections because of the temperature," he says. The northwest plains account for roughly two-thirds of India's annual wheat production on an average.