Rice -- the staple food of 65 per cent of India's population -- is in for a revolution. An Indian firm has developed a technique to develop genetically modified (GM) hybrids of the crop. If the method is given a green signal by the officials, then rice may become the first food crop to be commercially cultivated. The accomplishment is important, as it may facilitate the development of the much-needed drought-resistant varieties that can endure harsh conditions prevalent in many places 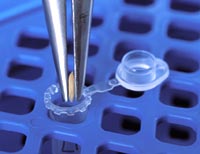 rice -- the staple food of 65 per cent of India's population -- is in for a revolution. An Indian firm has developed a technique to develop genetically modified (gm) hybrids of the crop. If the method is given a green signal by the officials, then rice may become the first food crop to be commercially cultivated. The accomplishment is important, as it may facilitate the development of the much-needed drought-resistant varieties that can endure harsh conditions prevalent in many places.

Hybrids, produced by crossing two genetically dissimilar plants, are used on a large scale because they produce higher yields or have desired characteristics. To create the hybrids, breeders/scientists have to prevent the parent plants from pollinating themselves. Since doing this by hand is labour-intensive and costly, male sterile strains (that cannot make pollen) are used. But there are only a few, if any, natural male sterile strains of any crop. And relying on just one can make a crop vulnerable to diseases. So researchers have turned to genetic engineering. Biotech giants such as the us-based Bayer have created male sterile lines by adding a bacterial gene called barnase in the pollen (male part of the plant containing the fertilising element). The gene destroys the pollen-protecting anther, and thus renders the plant male infertile.

Now Avestha Gengraine, the Bangalore-based firm, has been granted a us patent on a rival technique that relies on a curious phenomenon called rna editing. In most of the plants, the cells' energy-producing mitochondria alter some of their rna genes, like the nad9, before making proteins (required for all the activities of a plant). Scientists of Avestha Gengraine have added a nad9 gene in the pollen cell's nucleus. Along with the gene, they have also added a genetic sequence that enables the nucleus to transport the resulting nad9 protein to the mitochondria. The extra protein proves to be a strong competitor for the mitochondria's protein, and in this tug of war the latter is not edited properly and ends up being mutated; as a result, energy is not generated by the mitochondria for pollination and the plant becomes male sterile. To restore the plant's fertility, an 'antisense' (restorer) version of the nad9 gene can be added to the nucleus.

The company claims that the technique, being tested in basmati, could halve the time it takes to create hybrids. It can be used for cereals, fruits and vegetables as well. Villoo Morawala Patell, the head of Avestha Gengraine, is confident that the company's hybrids will not encounter the same opposition as other gm crops. "Without the help of a genetic sequence, the gene cannot penetrate into the mitochondria; therefore it will not affect the wild varieties," explains Patell. Agrees S K Raina, professor and principal scientist at the National Research Centre on Plant Molecular Biotechnology, Indian Agricultural Research Institute, New Delhi. He adds: "The system has endless benefits if the gene expression is 100 per cent. Even an error of one per cent would render it completely useless. It is a must that the results of field trials are made public." At present, the technique is being tested in Avestha's greenhouses. "We would conduct the field trials by 2005," reveals Patell.

The trials are important to also gauge the effectiveness of the antisense, asserts Deepak Pental, head of the genetics department of the University of Delhi, south campus, New Delhi. His apprehensions can be attributed to the fact that the restorer of the barnase system is not 100 per cent effective. "If the new technique proves to be successful, it can break the monopoly of the barnase system worldwide. This would dramatically impact the prices of gm hybrids," says Pental. Market forces will play a crucial role in determining the fate of the technique, especially in the context of crops like rice. "We already have very high-yielding conventional rice hybrids. Therefore, if the farmers have to pay huge sums to acquire the gm seeds they may be dissuaded," says Raina.

He asserts that the seeds should be subsidised, as they can provide succour to drought-stricken farmers. Even other experts advocate the same, but with a word of caution. "It is important to support such developments. But it is equally necessary to assess the economic and ecological trade-offs, before large-scale commercialisation is undertaken," says E A Siddiq, honourary chair, Centre for dna Fingerprinting And Diagnostics, Hyderabad.