Proposal for a sanctuary in the South Atlantic Ocean has been repeatedly submitted to the International Whaling Commission in recent years, but has failed to receive approval 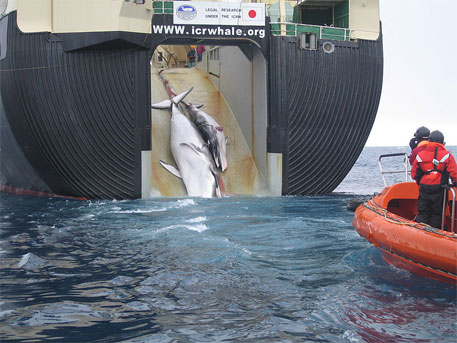 The  International Whaling Commission (IWC)'s 65th meeting began in Slovenia's Adriatic Sea resort of Portoroz with members debating a fresh attempt to create a whale sanctuary in the South Atlantic, an idea thwarted by pro-hunting nations for years.

Two sanctuaries are currently designated by IWC; both places prohibit commercial whaling.  The first of these, the Indian Ocean Sanctuary, was established in 1979 and covers the whole of the Indian Ocean south to 55°S. The second was adopted in 1994 and covers the waters of the Southern Ocean around Antarctica.  An additional proposal for a sanctuary in the South Atlantic Ocean has been repeatedly submitted to the Commission in recent years.  Till date it has failed to receive the three-quarters majority of votes needed to amend the schedule and thus become designated sanctuary of IWC.

One of the earliest international organisations of its kind, IWC was set up under the International Convention for the Regulation of Whaling in 1946.  This governing document is accompanied by a schedule which sets out detailed regulations, and can be updated by the commission when it meets.  The meetings also offer the opportunity for the commission to state its collective position on an issue via a resolution. This year, the commission will receive three proposed amendments to the schedule and 6 draft resolutions.  Some of the issues are complex and have previously proved contentious.

This IWC meeting is the first since the UN's highest court—the International Court of Justice—ruled in March that Japan had abused a scientific exemption to a 1986 whaling moratorium. Whaling for research purposes is exempt from the 1986 international ban on commercial whaling. The International Court of Justice had ruled that Japan's programme wasn't scientific as it produced little actual research and said Japan failed to explain why it needed to kill so many whales.

Almost immediately after the 1986 whaling ban came into effect, Japan launched its scientific whaling programme, widely criticised as a cover for its ongoing commercial whaling operation. Meat from these whales — supposedly killed for science — is then sold in food markets or given away free or at low costs to schools and hospitals in marketing drives to encourage the consumption of whale meat.

Despite the 1986 IWC ban on commercial whaling countries like Japan, Norway and Iceland have refused to end their whaling operations.
The 88 IWC-country members are equally divided into pro-whaling and anti-whaling camps, with Australia and New Zealand leading the opposition to what they say is the killing for commercial purposes — meat and oil production.

New Zealand plans a draft resolution at the four-day conference that will uphold the UN court's ruling and help ensure that no "illegal permits for scientific whaling" will be issued.

A market approach to saving the whales

Turning the tide: The campaign to save Vhali, the whale shark (Rhincodon typus) in Gujarat