Permits use of paddy field unfit for cultivation for other purposes 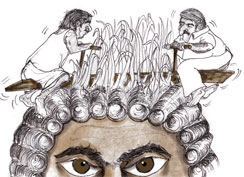 IN A judgement that could seriously affect conservation of paddy land and wetland, the Kerala High Court has allowed the common people to violate an Act that some influential people freely violate.

The court’s division bench observed that people with muscle and money power, and political or official patronage use paddy fields for other purposes. It directed that the less influential owners of fields unfit for cultivation should also be allowed to put their land to other uses.

The bench was hearing an appeal by Jafarkhan K, a resident of Vengola panchayat in Ernakulam district, who challenged a single judge bench verdict in a case related to reclamation of paddy fields.

The legal battle started last year when the panchayat moved court saying that Jafarkhan had used 5.1 hectare (ha) of his paddy field for expanding his saw mill. This was a violation of The Kerala Conservation of Paddy Land and Wetland Act, 2008, the panchayat said. The single judge bench directed the district collector to enforce the law and restore the land.

But the land was neither a paddy field nor a wetland, the division bench said in its judgement on January 18, 2012. The single bench had not considered the true nature of the land while giving the verdict, it said. Paddy land and wetland unfit for cultivation on account of conversion of adjoining paddy land should be allowed to be used for other purposes, it added.

“This judgement will have a very serious impact on conservation of paddy fields and wetland in Kerala,” says C R Neelakandan, environmental activist in Ernakulam. The verdict should have been confined to the particular case in consideration, he says.

“When the court extends its judgment to the entire state, it should have heard what farmers, activists or at least the government have to say about reclamation of paddy fields and wetland,” says V Harish, environmental and human rights activist.

The Kerala Conservation of Paddy Land and Wetland Act was enacted in 2008 after much hue and cry over acute food crisis and people’s struggles against large-scale filling up of paddy fields. It was enforced despite stiff resistance from the real estate lobby.

Rice is the staple food of the state, but the area under rice cultivation has been dwindling for the past three decades. A spurt in real estate business in the past few years has accelerated the trend. According to the State Planning Board, Kerala lost over 500,000 ha of land under paddy cultivation between 1980 and 2007.

Kerala requires 3.9 million tonnes of rice at present, says Leena Kumari, director of the State Paddy Mission. The production, however, is a mere 625,000 tonnes—less than a sixth of its total food grain requirement. “Large-scale filling up of paddy fields badly affected the state’s food security, groundwater availability and ecological sustainability,” says Neelakandan.

In 2010, Kerala initiated Ellarum Paadathekk, a project to increase rice production. Under this programme, in the first year, 12,000 ha of fallow land was made cultivable. In the second year, it increased to 20,000 ha.

However, reclamation of paddy fields continues unabated, say activists. In many cases, the government itself has violated the law. In one case, a single bench of the high court observed on February 21 that the paddy land and wetland conservation legislation is largely used in Kerala to reclaim fields rather than conserve or protect them.

The activists say the state government has not yet prepared a data bank of the notified paddy fields as the Act requires. Consequently, about a dozen cases challenging land reclamation are dismissed by the court every day.