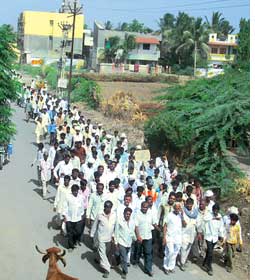 People of more than 10 villages in Bhavnagar district of Gujarat have launched an agitation against the state government's decision to give 4,500 hectares (ha) to the Nirma group for setting up a cement plant and for mining limestone.

The area granted includes government wasteland, a waterbody spread over 100 ha and grazing land in villages Padhiarka, Dolia, Madhia, Patva, Samadhiyala and Malan. The Mahuva mla, Kanubhai Kalsaria, of the ruling bjp has led the agitation for over a month now.

Kalsaria, a medical doctor who runs a charitable hospital in Mahuva, said the people asked him to lead their agitation because if the cement plant is allowed in the area, it will destroy agriculture and, subsequently, their source of earning.

"They came and told me that all of us should do something to save our farms.We have only small farmers holding two - three acres," Kalsaria said. This is a coastal area where salinity is an increasing problem for farmers. "The government says the land in the area is saline and not fertile enough for agriculture," Kalsaria added. "But two dams are being built here. We have been telling them that once the dams are ready, water will be available for irrigation and the land will become fertile." The mla has been touring the affected villages with his supporters since May 1.

People are angry also because the land allotted to Nirma includes a waterbody in Samadhiyala village. Kalsaria pointed out that a Gujarat High Court judgement prohibits granting an area with a waterbody for industrial purposes. "But the legal department of the state government interpreted it in a way that makes it convenient to grant the land to Nirma for the cement plant," he alleged. The cement plant will only increase salinity in the area, he believes. "The Samadhiyala dam was built in 2001 to prevent just that," the mla added.

"We will get water for irrigation from the dams in Malan and Samadhiyala. This is the reason we don't want to give away our land for a cement plant," said Kadviben, a farmer at the forefront of the agitation. The main objection of the people is that the administration did not consult them before it allocated land to Nirma. "I am the mla of the area. Even I was not aware such a move was being discussed. I came to know about it only after the authorities had taken the decision," Kalsaria complained.

Government officials denied farmers were not consulted before granting land for the one million-tonne cement plant. "We held meetings with the people, and after we had their consent we granted the wasteland and grazing land to industry," Bhavnagar district collector Pradip Shah said. Since Mahuva is a backward area, he added, industrialization is required there so that employment can be provided to people. "We need industry to create employment where agriculture is not very profitable," Shah said.

The farmers' agitation has forced the state government to constitute a committee of five members, including chief secretary S K Shelat and former Bhavnagar collector A B Panchal. The committee is mandated to find a solution to the conflict. "The committee will consult all parties concerned, including farmers," minister of state for industries Saurabh Patel said, adding that only a "handful of elements are opposed to the plant".

Implying people with vested interest were fomenting trouble, Patel said, "When the administration held a gram sabha, nobody opposed. During the environmental public hearing, nobody opposed the project. But now, some people have started this agitation in the name of farmers. "

Kalsaria does not expect the committee to find a solution because it does not have any representative of the affected people.

"When the government announced the committee, we had asked them to include a leader from the area and one environmentalist. Instead, the government has included people who would most likely give a green signal to the plant," he said.