Land Titling Bill: silent on rights of tribals and the poor 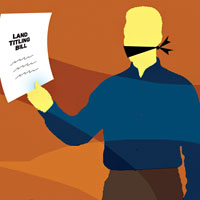 THE Union government has proposed giving conclusive ownership titles to landholders across India through the Land Titling Bill 2010.

At present, people depend on pattas (deeds) to prove ownership. This system is fraught with problems: a person who has sold the land could retain the patta and claim ownership; settling the dispute would take years of litigation. The bill, drafted by the Department of Land Resources in the Ministry of Rural Development, proposes every land transaction be recorded and maintained by a central authority that would assign a unique identification number to each property. In case of dispute, the status of a land parcel can be ascertained on the Internet, using the number. A ministry source said such a law would free the land market and make it easy for owners to access bank loans or mortgage property as they would have clear titles. But can the bill usher in land reforms?

The proposed law will not help the marginal farmers, said Ramesh Singh of the non-profit Ekta Parishad in Bhopal which mobilised 25,000 landless farmers to march to Delhi in 2007 to draw the Centre’s attention to land reforms.

He said most of the work on settlement and recording of land rights happened in the 1930s and 1940s. Post Independence, all political parties ignored settling land rights. As a result, tenant farmers continue to be evicted from the land they have cultivated for generations as their tenancies are unrecorded. The bill is silent about the problem, Singh said. The bill is also silent on how it would deal with community-owned land, critical to the survival of tribals.

Brian Lobo, activist with the non-profit Kashtakari Sangathana in Maharashtra said in his experience land rights are rarely recorded even under Forest Rights Act despite prescribed procedures. “One can foresee what will happen with land titling. Unrecorded tenancies which abound in adivasi areas would remain unrecognised,” he said.

A property valuation division in the land titling authority suggests the bill is a means to open large land banks to land sharks, Lobo said. “After all, the stated objective of the bill is to provide easier access to capital and efficient property transaction,” he said. “Centralisation of land records will benefit upper classes, corporates and land developers,” said Ulka Mahajan of Sarvahara Jan Andolan, fighting for rights of tribals in Maharashtra.

Activists expressed concern over the composition of the land titling authority (see: Land records to be centralised). “There is no role in it for civil society, no checks and balances,” Singh said. This, he believes, is contrary to what the National Land Reforms Committee and the National Land Reforms Council recommended. The committee, set up in 2007, had recommended scrapping of the special economic zones policy and revival of the land ceiling act.

The positive aspects of the bill lack clarity. For instance, the bill says the titling authority will suo moto take up irregularities in provisional titles. This provision would be effective only if the rights of tenant farmers and tribals are recorded, Singh said. It is also not certain if all states would enact a land titling bill. Since land is a state subject individual states are expected to enact their own law based on the Central bill.

Ministry officials admitted there are lacunae in bill. They said they would probably consult activists and academicians before preparing the final draft that would be sent to the Parliament.