This is with reference to an article titled 'Betrayal via Bamboo' published in Down to Earth, -16-30 June 2011 issue. The article has distorted the facts regarding availability, extraction and silvicultural management of bamboo in Gadchiroli and Chandrapur districts of Maharashtra, which are covered under agreement between BILT and the Government of Maharashtra to allow BILT to enter upon the bamboo forest areas to extract and remove bamboo for the purpose of manufacturing pulp and paper at its mill in Ballarshah (Maharashtra).

The author of the article had a discussion with me and a record note of discussion was sent to her by BILT management. The record note clearly mentions that the author did not ask questions on larger and more important aspects of bamboo operations carried by BILT. On the contrary, she has drawn distorted conclusions quoting some NGOs/groups to cast aspersions on BILT's activities in the area.

Through this rejoinder BILT wants to refute the aspersions cast on its activity of bamboo working and intends to provide a proper understanding of its activities of bamboo working as well as silvicultural management and production aspects of bamboo forests. We also wish to show how the impacts and outcome differ when the same bamboo forests are used for extraction of industrial bamboo cuts vis-a-vis long bamboo.


You would appreciate the fact that such news may lead to unnecessary market speculation, which can be detrimental to the company

We, therefore, request you to publish our rejoinder to clarify our position.

The letter accuses me of distorting facts, and argues that I have not asked questions on ‘important aspects’ of BILT’s bamboo activities. But the fact is that I had asked questions on issues relating to the article’s subject. Pande has brought up the issue of silviculture of bamboo in this letter, which subject he had ample scope to mention in the interview, when I asked him about costs. But he did not do so. He was focusing on the company’s efforts to reduce bamboo consumption and its efforts to procure bamboo from private growers, which are both not relevant to the contract between BILT and the Maharashtra government, which was the subject of my article. Later he sent me a note, but that too does not contain any reference to bamboo silviculture practices.

The letter makes a number of points to which my reply is as follows:

1, 2, 3: There is nothing in my article which contradicts these points.

4 a, b and c : These facts are corroborated neither by the department nor contractors nor the Mendha Lekha gram sabha, which has recently extracted its own bamboo. Anyone working the forest is required to strictly follow the department working plan, and one of the most important clauses in bamboo is to remove all culms ready for harvest. Department officials have told me this on many occasions including detailed discussions while working on this story. Though officials have mentioned apprehensions about gram sabhas, I emphasise that there is categorically no mention of working by contractors causing losses to bamboo productivity due to improper extraction.

In my communication with contractors, they said they fell all sizes and thicknesses of bamboo, and they are used not just for structural purposes but other purposes as well. In Gadchiroli I have come across a private contractor’s depot where sorting of bamboos of all lengths and thicknesses was going on. I saw a man storing bamboos that were three feet long and less than two cm in diameter. for sale to tomato cultivators as supports for the vines. Also, they said they are required to extract all bamboos ready for extraction. Mendha Lekha village was given similar instructions by the department while felling its own bamboo this year. So I do not think the 30 per cent less productivity figure is accurate.

The letter also accuses private contractors of felling young bamboo culms, which is patently unfair in the absence of evidence, and considering the fact that BILT has been accused of the same offense by village gram sabhas – I have mentioned the same in my article.

Lastly, Mr Pandey had ample scope during the interview to mention these facts to me, which he didn’t.

4 d: Not relevant to my article.

5,6 : This objection is based purely on a point of linguistic usage. In the context in which the word ‘control’ is used it is very clear that the word has been used, once in terms of extraction rights under the lease, and a second time in terms of controlling the bamboo felling work on which the local people are dependent for a livelihood.

7: All points mentioned about bamboo cost that BILT is incurring are already mentioned in my article. BILT is definitely getting a subsidy despite the raised cost because private contractors, who are paying a higher royalty, also have to incur extraction and transport costs which are the reasons quoted by BILT for the rise in costs. The point about reducing bamboo consumption is not relevant to my article.

Also, during the interview, Mr Pandey told me that BILT does not use long bamboo, and all the long bamboo extracted by it automatically goes to the department as nistaar. This letter does not corroborate that point. Also, locals working for BILT said that they are required to fell all bamboo—long and short – into smaller industrial cuts, which cannot be used for nistaar. So should I be treating his earlier statement as a deliberate effort at misinformation?

10 : This figure was given to me by department officials, so if it is wrong, it is their lookout. And it does not have anything to do with BILT and its lease.

12 : Road construction was one of the costs mentioned by Mr Pandey in conversation with me as a price rise factor. So if the Rs 4,000 per ton includes the road building costs, as he says, then why should it be seen as an extra. Also, BILT is making roads because it needs them itself. Villagers are only incidentally benefited. As for labour payment, villagers have not corroborated the claim regarding medical facilities and food –grains, and have accused BILT of paying an exploitative wage. And the wage given by BILT should be compared to the bamboo felling wage given by other agencies, not with NREGA – which comparison is unfavourable to BILT.

The editorial “POSCO: take land but give life” (July 1-15, 2011) can be considered a seminal paper on land acquisitions for development projects. The life of the progeny of those who gave their lands for such projects is no good today, though their elders were considered flush with money. Little did they know that after losing their land, they will have to spend money on everything which earlier used to be free of cost—air, water, firewood, timber, fodder, honey, lac and medicinal herbs. Their social relations have also been shattered because of scattering of families.

We revere Mahatma Gandhi and have given him the title Father of the Nation. We print his portrait on currency notes. But we have drifted away from his teachings. The Gandhian thought has been reduced to a subject taught for the administrative services examinations. Those who pass such exams, consign the thought to dust bins as soon as they occupy positions in the government’s administration.

India is a big market, which is why multinationals are making a beeline to enter India. As the editorial aptly says, in days to come a respectful life has to be assured in lieu of land. 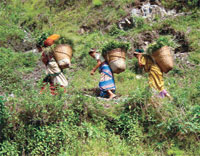 If one needs to understand the impacts of desertification, it is imperative to understand and document the climate change impacts experienced and observed by the people living in desert regions, dovetail them with scientific observations and then proceed towards a mitigation plan.

The death of Swami Nigamanand while on a fast to protest sand mining in Uttarakhand is a matter of great concern (‘A swami and sand mafia’, July 1-15, 2011). Rather than being punished, the people responsible for his death, mining contractors, government officials and his associates of Matri Sadan ashram in Haridwar, remain unaffected. Why Nigamanand was the only one to fast? Had it been a collective protest by the ashram, all the swamis would have fasted. The country should stand together to stop such method of agitation where an individual is dragged to death. The government should ban fasts unto death.

Ethical Is The Word

I agree that a robust drug discovery programme requires phase trials (‘Ethics on trial’, June 16-30, 2011). But they should follow the safety measures and guidelines. Just like the Ahmedabad case highlighted in the cover story, it was widely reported in 2001 that the Thiruvananthapuram-based Regional Cancer Centre was conducting unethical clinical trials on poor cancer patients in collaboration with Johns Hopkins University in the US. The patients were being used as guinea pigs to test M4N, a drug banned in the US. It is imperative that all the practices related to a drug trial conform to international norms. Another point is to educate the volunteers.

It is sad to observe that villages in Madhya Pradesh are opposing a state plan to notify their forest Katthiwada as a wildlife sanctuary (‘Age of dissent’, June 1-15, 2011). Katthiwada was rich in wildlife in the beginning of the 20th century. But extensive hunting ruined it. The remaining animals are facing extinction because humans do not want to leave the forests. Where will the animals live, if not in a sanctuary?

The article “Dam at fault” (July 16-31, 2011) mentions that the proposed dam on the Kalu river in Thane district, Maharashtra, “will submerge five villages and partially displace six others. It will also inundate about 2,000 hectares (ha) of forestland, including a reserve and a community forest.” The area is incorrect. The dam will inundate 2,100 ha, which includes about 1,000 ha forestland and the remaining 1,100 ha occupied by 17 villages.