Want to live in a city and grow your own food in a village nearby? There are companies that can help 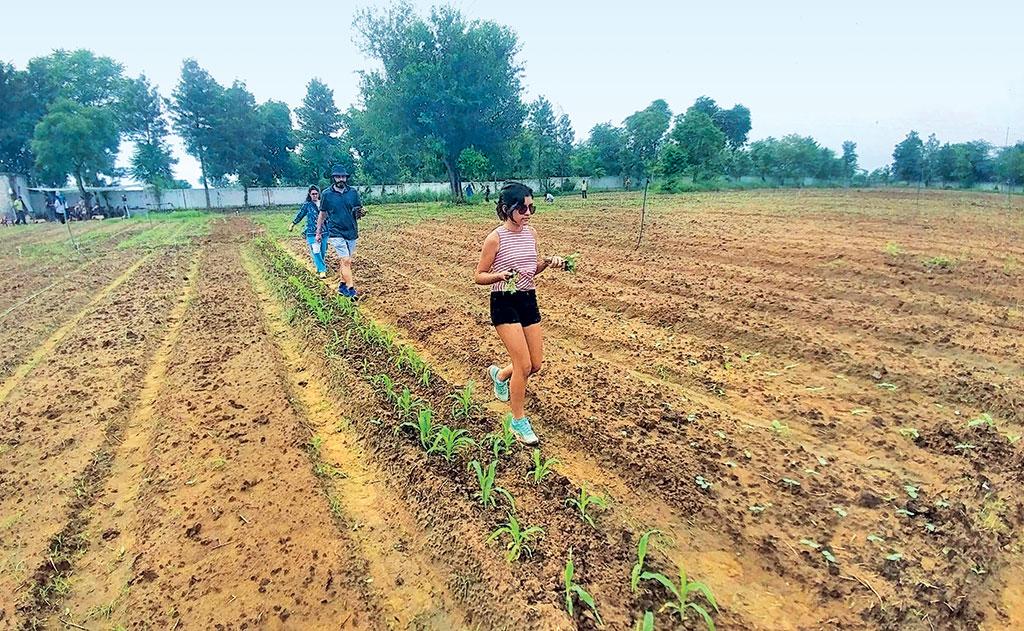 Meeta Talwar (in background), a Delhi-based architect, has leased 0.2 ha from Edible Routes in a village in Gurugram and says that her entire family enjoys the process of growing food (Photo: Arnab Pratim Dutta)

If you are a city dweller who wants to practise farming on weekends for fun, or a health conscious individual who wants to be sure that the vegetable on the table has been grown without the use of pesticides, this is just the initiative for you. Three companies in Haryana are offering land where you can grow what you want for a nominal price.

The companies—Edible Routes, Green Leaf India and Organic Maati—take land on lease from farmers in and around Gurugram and Palwal districts and sublet it. Neha Goyal, a lawyer based in Delhi, says she leased 0.2 hectares (ha) from Edible Roots in July because she wanted to be close to nature and learn about agriculture. “I plan to grow tomatoes,” she says.

Edible Routes is owned by Kapil Mandawewala, who launched the company in 2010 in Delhi to help people practise organic farming. In June 2018, Mandawewala leased a little over 4 ha from a landowner in Gurugram’s Garhi Harsaru village and started subletting plots to subscribers. As per the contract offered by Edible Routes, a subscriber has to lease at least 0.2 ha for six months. The cost for this comes to R29,992 (see ‘Control what you eat’). The company promotes its initiative through the social media and workshops it holds for its other activities, and in just two months, Edible Roots has had over 42 subscribers for its “farmlet” initiative. “I studied financial management in the US, worked there for five years and returned to Gujarat in 2008 to practise organic farming on my farmland. I tried farmlets there too, but the idea did not gain attention. In Gurugram, it has caught on,” says Mandawewala.

Edible Routes has hired two farmers at Rs 10,000 a month. They live in an accommodation on the plot with their families and are responsible for the farm’s security and maintenance. Mandawewala holds an orientation programme at the plot every week to inform subscribers about the seasonal vegetables that can be grown.

The subscribers are also given information about the preparation of the field and sowing, and are encouraged to visit at least once a week to take part in the cultivation process. “They can visit whenever they want,” says Mandawewala. “The subscription cost includes the money that the company spends on buying seeds, fertilisers and providing irrigation. I expect a profit of Rs 50,000 per acre (1 acre equals 0.4 ha), though it is too early to talk about profits,” he says. 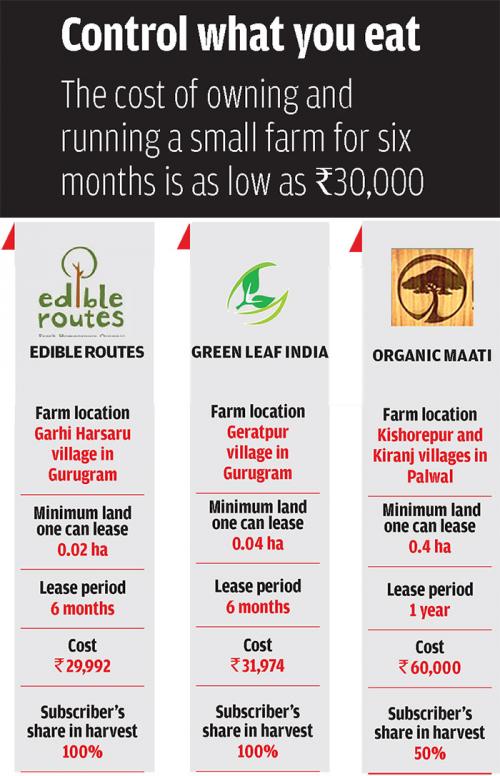 Profit not a motive

Unlike Edible Routes, Green Leaf India does not have a profit motive. Launched in 2016 by Deen Moh ammad Khan, district horticulture officer of Gurugram, the company has leased about 3 ha in Geratpur bas village of Gurugram from six farmers and has sublet it to 80 subscribers. Each subscriber owns 0.004 ha for six months for Rs 31,974. “I came to know about the land in the village through some farmers and convinced them about the benefits of the business model,” says Khan.

Green Leaf India’s business model is the same as that of Edible Routes, except for one difference. “Here the farmers who own the land are also employed to help the subscribers. For this I pay them Rs 2,000 a month. So they earn from the lease as well as get a monthly salary. On an average, the six farmers make Rs 60,000 a year from their lands,” explains Khan.

Putting land to use

The business model of Organic Maati, the third company, is slightly different. The subscribers only get to keep 50 per cent of the produce, while 50 per cent goes to the company. But since it offers 10 times more land than Green Leaf India or Edible Routes, at the same cost, the output is more and subscribers happily part with the produce. Deepak Gupta, who launched the company in 2012 to deliver organically grown vegetables to homes, and diversified to “farmlets” only in 2016, says that he sells the produce to cafes and retail shops to provide a monthly salary of Rs 15,000 to the five farmers who look after the land. He also provides them lodging facility near the plot. “The farmers from whom I leased land were about to quit farming,” says Gupta, who leased over 16 ha in Kishorepur and Kiranj villages of Palwal in 2016. He claims that the company made a profit of R50,000 in 2017-18 from this initiative. Rishabh Gupta, a Gurugram-based chartered accountant, who has sublet 0.4 ha from Organic Maati in May, says the idea of “farmlet” is sustainable. “The model provides financial security to farmers irrespective of drought, flood or any other disaster. Moreover, as the farming is organic, whatever we take from the earth, we return it in the form of compost and natural fertilisers.”

(This article was first pubilshed in the 1-15th September issue of Down To Earth).