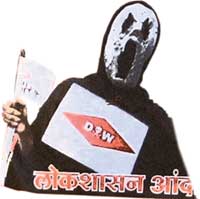 On March 28, following a high-powered state committee's report clearing the project, Maharashtra chief minister Vilasrao Deshmukh gave Dow Chemical International Pvt Ltd's proposed research and development (r&d) centre in Shendi village near Pune the go-ahead to begin construction. Work on the project, that is to come up on 40 hectares of local grazing land, has been stalled since January following strong protests by local villagers and activists ('No entry' , Down To Earth, March 31, 2008) who say the project doesn't have the village panchayat's permission or an environmental impact assessment (eia) report.

The Maharashtra Pollution Control Board (mpcb) has quashed its earlier consent to the project and now set up stringent environmental conditions for Dow to meet before it can begin work on the project. But the Maharashtra government's consent does not mention this. mpcb's conditions include, preparing an eia report, seeking clearance from the Union Ministry of Environment and Forests (moef) and obtaining statutory permissions from the directorate of industrial safety and health services, and the department of explosives. mpcb has also changed its earlier consent to "manufacture" to "research and development only".

But while the state government claims to have found an amicable solution to the controversy, villagers and activists, who want the project scrapped, are far from satisfied.

"The high-powered committee's report makes a mockery of disciplining Dow by giving it a no objection certificate (noc) to restart its construction activities even before it can get the requisite clearances asked for by the mpcb," says Vinita Deshmukh, editor of Pune-based weekly, Intelligent Pune. "Also, no time frame has been given to Dow to expedite crucial environmental clearances. Meanwhile, it can resume construction work," says Deshmukh, who examined the committee's interim report using rti, the Right To Information Act (see box: Talking tough). The report has now been accepted by the chief minister.

Experts are questioning the legality and real intent of state government's present stance. "According to centre's eia notification, construction work cannot begin before a company submits its eia report and obtains required environmental clearances. How can the state government issue a new stringent consent letter to Dow and also allow it to begin construction at the same time? If government was serious, then it should have first made Dow obtain all clearances even before sanctioning the construction plan," says B G Kolse Patil, retired Bombay High Court justice, who is leading the agitation against Dow's proposed facility. The eia notification, dated September 14, 2006, reads: "An application seeking prior environmental clearance in all cases ... shall be made before commencing any construction activity, or preparation of land, at the site by the applicant."

Shyamlal Goyal, secretary of the state environment department, who headed the high-powered committee reviewing the project, was not available for comment.

Meanwhile, people from over 10 villages in Pune district's Khed taluka , who have been protesting the loss of their common grazing land, claim that they will continue with their agitation. "We do not care if the state government has given a green signal to Dow. We will not allow any construction work to begin in our village," warns Shantaram Maruti Panmand, former sarpanch of Shendi village. Villagers have their protest roadmap ready. They plan to challenge the legality of the state government's decision in high court and hold a people's tribunal against Dow on April 19-20. "Last but not the least, we have full faith in people's power. Even if the first two ideas fail, janashakti will ensure that Dow is not able to set shop anywhere in India," says Patil.