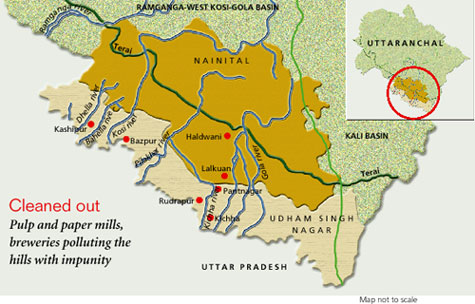 spcb has declared the waters of Dhella, Bahella, Kichha and Pilakhar unfit for human consumption. Dissolved oxygen levels -- an index of the ability to support aquatic life -- in Dhella and Bahella, which join Kosi outside Kashipur, have plummeted to zero. Waters of these rivers, once drinkable, will now be used respectively for fisheries and conservation (class D) and irrigation, industrial cooling systems (class E) (see table Out of breath).

"Nearly 25 years back, waters from the Bahella river was potable, and borewell water 5-6 metres underground used to be excellent. But slowly factory effluents have turned both surface and groundwater undrinkable," says farmer Kashinder Singh of Dauriparsa village in Kashipur district. "The terai region abounds in rich groundwater with shallow aquifers ranging between 2-4 metres. Industries have polluted this shallow aquifer zone," says Rajendra Singh Kathaith, junior engineer of spcb, Dehradun. "Earlier clean water was reachable at a depth of only 20 feet. Now we get clean water at 140 to 150 feet," he adds. The Bahella river is not even used for irrigation. Borewells 120 to 130 feet deep are used instead. In Bindukhatta, the borings were only 10-12 feet and yielded fresh water of good quality. "Now the borings are as deep as 30-35 feet and even that is polluted," says farmer Vasant Pande.

On September 9, 2006, the residents of Lalkuan town and Bindukhatta village took up cudgels against the Century Pulp and Paper Mill after livestock died on drinking water from Ghora nullah, a tributary of the Gola river. The factory management claims that the mill maintains its effluent treatment and air pollution control devices. Yet, the residents complain of respiratory diseases, stomach ailments and livestock deaths.

"Fungal infections like ringworms and skin diseases like itching and spotting are common and have increased from 702 to 1,109 in 2004-2005," says B C Joshi, the pharmacist at the Bindukhatta Primary Health Centre. The District Tuberculosis Centre, Haldwaani has also registered 32 new cases of tuberculosis in the last six months from Lalkuan and Bindukhatta alone. The primary health centre at Lalkuan and Haldwani has reported nearly 220 tuberculosis patients within the last three months according to Prakash Utarakhandi, a social activist.

Soil fertility has also fallen. Wheat production in Bindukhatta has shrunk by almost 50 per cent and in Dauriparsa paddy production has dropped by 25 per cent in the past four to five years. "In place of 10 boris (1,000 kg) of wheat we get just five," says Bhagwan Singh Majra of Bindukhatta. "This village was renowned for high-grade soyabean. But now productivity has fallen and farmers are shifting to other crops," says farmer Anand Ballabh Joshi.


spcb has recently ordered shutting down the Cheema and Multiwal paper mills because of gross violation of environmental norms. It has also seized bank guarantees of four other paper mills on asimilar grounds.

On March 27, a public interest petition was filed against the polluting units by Ajay Rawat, head of the department of history, Kumaon University and a well-known environmentalist, in the High Court of Uttaranchal. But spcb filed a counter-affidavit filed on September 9 and the matter is pending.