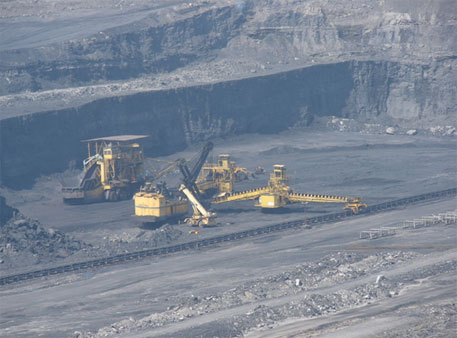 The five coal blocks are located in Sarguja, Raigarh and Dharamjaigarh districts of the state and have been in operation since 2010.

In a landmark ruling last year, the apex court had cancelled 204 Schedule I coal blocks allocated by the government between 1993 and 2011 in different parts of the country. Weeks after the order, the government took the ordinance route to enable the acquisition of land of the coal mines for auction later.

“Large parts of allotted coal blocks, including most of the coal belt in Chhattisgarh, lie under the Fifth Schedule of the Indian constitution, where consent of the gram sabha is mandatory before proceeding with any mining activity. However, this provision has been blatantly violated or abused in most cases of current allotments,” says Alok Shukla, the convenor of Chhattisgarh Bachao Andolan.

About 61 per cent of the total area of Chhattisgarh is under the Panchayat (Extension to Scheduled Areas) Act, 1996, (PESA) which states that the consent of the gram sabha is required for any industrial activity, including mining. Shukla says that the coal ordinance approved by the Cabinet does not leave any room for rectifying the various existing process irregularities in forest and environmental clearances. PESA remains violated in these areas, he says.

In their resolution, the villages have stated that while they are not against development in their region, all issues related to land and forest rights of residents must be resolved. They have asked for government reallocation and re-auction of coal blocks in the area to be stopped until such issues are settled.

Calling for stringent rules to ensure compliance with environmental laws, the resolution says that wherever there are violations, the government must ensure that the new allottee commences mining only after all faults are rectified. It also states that local indigenous adivasis and other traditional forest dwellers should be treated as key stakeholders in any development activity in the region, including mining.

The resolution will impact about 31,203 hectares of land and 98 million tonnes of coal per annum, where mining activity is already in progress.

Most of Chhattisgarh’s proposed and operational coal blocks lie in the “no-go” area, a classification envisaged in 2010 to demarcate areas with rich ecological diversity. Sixteen of 20 villages that passed the resolution are located in Hasdeo Arand, a 1,600-square kilometre-region which is part of an elephant corridor connecting at least three major national parks. The residents, mostly adivasi Gonds and Baigas, are entirely dependent upon forests for their livelihood.

“They have not rehabilitated anybody in our village. Mining goes on unabated despite the Supreme Court’s order to cancel these allotments. Why should we allow fresh auction or allotment to happen when no one paid any attention to our rights?” asks Jainandan Porte, a resident of Ghatbarra village impacted by Rajasthan Urja Vidyut Nigam Limited’s coal mine in Parsa and Kente.

Porte says that the mine development operator, Adani Enterprises, has paid no heed to these issues (See story: Life after Coalgate)

Since the resolution was passed this month, Chhattisgarh Bachao Andolan and several village residents from Bilaspur have approached ministers, political parties and bureaucrats to communicate their grievances. Janata Dal (United) has written to President Pranab Mukherjee asking for the auction to not be allowed until these issues are settled. Left parties have also lent support to these villages.

Environment minister Prakash Javadekar, however, asked village residents on Monday to not oppose the development coming to these areas, says Shukla.

In keeping with its development agenda, the BJP-led Central government is making several efforts to push through reforms and dilution in laws to facilitate mining. It introduced the Coal Mines (Special Provisions) Bill in the winter session of the Parliament to increase coal production to the maximum extent possible by enabling expeditious environment and forest clearances. The Bill was passed by the Lok Sabha but stalled in the Upper House.

In August 2014, Javadekar had allowed the expansion of coal mines by 5 million tonnes per annum without holding any public consultation with the affected villages.

Provisions in the Forest Rights Act which required the consent of gram sabhas for prospecting in forests has also been done away with. Additionally, the requirement of inspection of mining projects by ministry officials for plots less than 100 hectares has been removed. The environment ministry has also set aside compensatory afforestation to be done by prospectors.