While police say D K Ravi’s death is prima facie a case of suicide, Opposition parties and civil society assert it could very well be a planned murder since the officer was constantly taking on law-violators 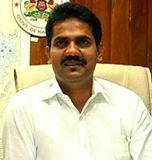 The death of IAS officer D K Ravi, who had earned a reputation for taking on the sand and land mafia, has sparked public outrage in Karnataka. Social activists are rallying behind Ravi’s family members, demanding a probe by the Central Bureau of Investigation (CBI) into his mysterious death.

Ravi, who was serving as additional commissioner of commercial taxes (enforcement), was found hanging from the ceiling in the bedroom of his government-rented flat in south Bengaluru on the evening of March 16. The police say prima facie the case appears to be one of suicide. However, social activists and Opposition parties in the state argue that considering Ravi’s constant fight against law-violators, the death could be a planned murder.

Thirty-six-year-old Ravi, a 2009 Karnataka cadre IAS officer, was known for his honesty, forthrightness and zero tolerance for corruption. He was from Kunigal taluk, Tumkur district. His first posting was in 2011-12 as assistant commissioner, Gulbarga sub-division. Later, he became chief executive officer, Koppal zilla panchayat, in 2013. He rose to fame after he was posted as deputy commissioner, Kolar district, in 2013-14. In October 2014, he was transferred to Bengaluru as additional commissioner, commercial taxes (enforcement).

“The death occurred when he was planning raids on some big developers to unearth commercial tax evasion,” social activist Ganesh S Koundiny told the media persons in Bengaluru. He said he had spoken to Ravi a couple of days before his death. Ravi, after taking over as additional commissioner of commercial taxes in October, had recovered evaded taxes amounting to about Rs 400 crore from housing societies, he added.

During his one-year tenure in Kolar district, he had succeeded in establishing a strong bond with people and won their hearts by taking on the sand and the land mafia. He cracked down on builders and realtors who encroached on government land and public water resources like tanks and rivers.  He had taken up a demolition drive against illegal constructions in the district. As there were a lot of land disputes in the district, Ravi started "Revenue Adalats". His initiative to protect government land and water resources had endeared him to the people but he earned the wrath of local elected representatives, politicians and influential land and sand mafia. They succeeded in getting him transferred from Kolar.


Officers and activists who took on the sand mafia 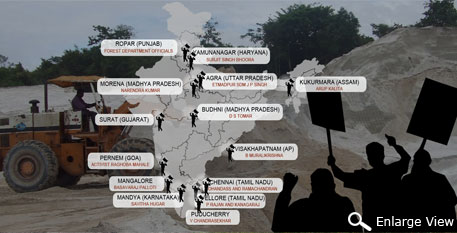 When he was transferred in October last year, the entire Kolar district rallied behind him. People came out on the streets and observed a one-day bandh and launched a post-card campaign against his transfer.

Soon after assuming charge in the commercial taxes department, he conducted several raids on commercial establishments and realty firms in Bengaluru and Mysore.

Ravi is said to have been in the thick of preparations to continue with his raids on builders and other business people for tax evasion. As additional commissioner of commercial tax (enforcement), Ravi had raided over 20 firms, including builders, jewellers and exporters and recovered tax dues. The Opposition members in the Assembly have pointed to the fact that a realty firm linked to home minister K J George was among the raided firms.

George has refuted the allegation.  “I am the chairperson of Embassy Golf Links. The commercial tax department never served any notice, let alone carry out raids, on us. We owe no dues to the government. One RSS member tweeted that our company owed Rs 40 lakh and everyone picked up on that piece of information,” he asserted.

But activists fear the state police agency, which comes under the home minister’s jurisdiction, will not be able to conduct a fair investigation into the death. In Kolar, as soon as the news of Ravi’s death broke out, people cutting across party lines began protesting all over the district, seeking a thorough inquiry into the incident. People blockaded highways and staged protests in many places in the district.

Ravi’s family members refuse to accept the police version that his death is prima facie a suicide.  Ravi’s father, Kariyappa, mother, Gouramma, and his brother, D K Ramesh, staged a sit-in protest in front of the state secretariat on Tuesday against the state government’s decision to hand over the case to the state crime investigation department instead of CBI.

The Opposition parties, too, are intensifying their demand for a CBI probe into the death. “Who is the government is afraid of? Why cannot it hand over the case to an agency outside the state?” asked Bharatiya Janata Party leader and former chief minister Jagadish Shettar. Being an upright officer, Ravi had been receiving threats from influential and powerful builders and underworld dons because he had taken some hard decisions against them, said Shettar in the state Assembly. “Ravi is not a person who would commit suicide. The chief minister should hand over the case to the CBI as it appears to be a clear case of murder.”

Union law minister Sadananda Gowda, too, has urged the Karnataka government to look into the matter. "The death is suspicious. It could be an organised crime and planned murder. Everybody suspects it is a cold blooded murder. We request the state government to look into it. If they need help from the Centre or want the CBI to investigate, we will pressurise the home ministry on this," said Gowda.

Judgement of the National Green Tribunal regarding illegal sand mining in the Yamuna riverbed, 13/01/2015

Audit Report (Revenue), Controls and System for Sustainable Mining in Karnataka for the Year 2011-12