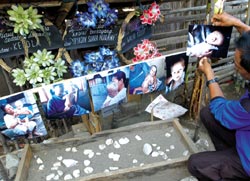 The us embassy in Indonesia is facing flak from environmentalists for defending the Denver-based mining company Newmont, which has been charged with dumping carcinogenic waste in Indonesia's waters. Residents of Indonesia's coastal villages, Buyat and Ratatotok, have sued Newmont, the world's largest gold producer, for dumping mine waste containing arsenic and mercury in the area's ocean waters. They allege this has destroyed fishing, their livelihood, and caused health problems like cancer and deformities.

The Indonesian police recently detained Newmont officials for questioning in this regard. The us embassy did not take this kindly. Its representatives issued a warning, saying the act could "harm the country's efforts to attract investment". "The us embassy's actions exemplify the Bush administration's misguided foreign policy. No country or community should be pressured into accepting that its children will be poisoned in exchange for development," said Stephen Mills, director of the international programme of Sierra Club, a us environmental group.