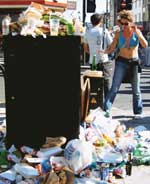 The New Zealand government recently okayed a move to relocate a population of 250 rare native snails, which were holding up the development of a coalmine.

State-owned mining company Solid Energy was given permission to shift the Powelliphanta augustus snails from their home on Mount Augustus in South Island -- the only place the snails are known to exist -- to a new home, which should be as close as possible to their old habitat and fenced off from predators.

The company will have to spend around us $1.3 million on relocating the snails to extract us $246 million worth of high-grade coal for export.

But Kevin Hackwell, director, Royal Forest and Bird Conservation Society, said moving the snails was not enough to guarantee the survival of the species. He accused conservation minister Chris Carter, who approved the move, of agreeing to the first state-sponsored extinction of a species.