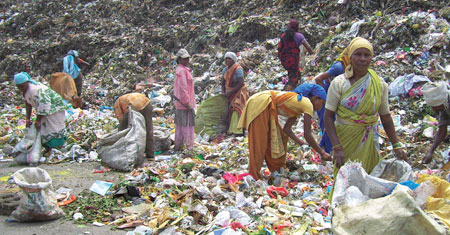 Under the bin-free city project, launched by the Nagpur Municipal Corporation (NMC), 530 of the city's 700 garbage bins have been removed till now. But they have been replaced by open dumps.

NMC started the drive in July 2009, privatising collection and processing of garbage. It gave Kanak Resources the contract to collect garbage from every household in the city and deliver to the Bhandewadi dumpyard in Nagpur's eastern part. The municipal corporation signed up Hanger Biotech Energies for setting up a garbage treatment plant at the dumpyard.

M R Ganvir, head of NMC's health department, denied the allegations: "Every month NMC employees collect signatures of 30 residents in every ward, certifying that trucks are working regularly." Jagtap disputed this explanation: "The signature collection does not count."

541 per tonne of garbage totalling

3,78,700 per day for an average of the city's 700 tonnes. Hanger's plant started processing 60 tonnes of garbage per day in its first phase around June-end. Parbatbai Netam, who has been working at the dump for 15 years, claimed only trucks carrying wastes from hospitals and malls are allowed inside the plant. "The useless garbage is dumped outside," Netam said. D D Jambhulkar, an NMC official and in-charge of dealings with Hanger, said only five per cent of the processed garbage is supposed to be recyclable.

The privatisation has affected livelihoods of 5,000 ragpickers who used to rummage through the city's bins and dump yards. The daily income has plummeted from

Jambhulkar revealed that six hectares (ha) of the 22 ha dumpyard has been allotted as green zone which cannot be used for commercial puposes. But Ashiq Bansod, NMC sanitary inspector, said a golf course is being built at the dumpyard.