The embankments made in the aftermath of Cylone Aila of 2009 stood firm against the disaster, claimed officials

Nearly 20 days after Cyclone Amphan made a landfall in south West Bengal, a remote village in Sundarbans, Uttar Chandanpiri, remained a tell-tale of the cyclone’s fury. While mud houses were flattened out, brick houses and embankments made after 2009 Cyclone Aila stood the ground.

The cyclone made the landfall at a point closest to the village, about 100 kilometres from Kolkata, on May 20.

“My family of 10 stayed in the house. All of them fled to nearby school once the wind turned strong. I stayed back as there were valuables. However, around 3 pm, the house could not take any more and it caved in,” said Jayprakash Das, whose house was badly damaged.

Sheikh Abdul Mannan, a neighbour of Das, claimed that while his two poultries were severely affected, his one-storied brick house stood the storm reasonably well.

“Though most mud houses were severely ravaged, the brick houses survived the cyclone apart from few damages here and there,” said Mirja Maidul Beg, who works in Kolkata.

Locals pointed out that the village could have been washed out had the high tide in adjoining Saptamukhi river and the peak of the storm coincided.

When asked about the help received from administration, both Das and Mannan alleged they never received any material help. “I got some papers to fill up after Bulbul cyclone. But no help came our way,” said Das.

A local Trinamool Congress leader, however, refuted the allegations: “I do not know what their claims are, but most people in the area received all help after Cyclone Aila and Cyclone Bulbul.”

The Opposition alleged that the Trinamool Congress ran the state government only help their supporters. Complaints about political bias in post-disaster relief distribution has been ringing in rural Bengal since Left Front’s domination in state — and the narrative has not changed with the change of political guards.

BJP state chief Dilip Ghosh requested the Union government to transfer the relief money directly to bank accounts of the affected people, casting aspersion that otherwise the amount would be siphoned off. 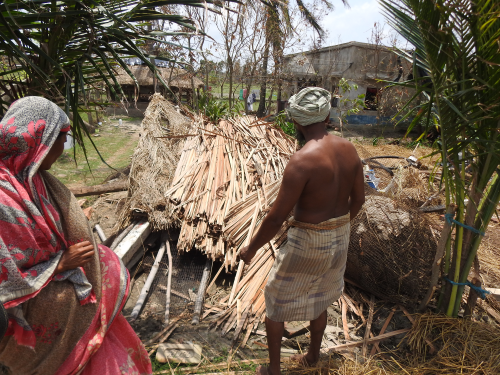 Chief Minister Mamata Banerjee strongly condemned the allegation saying the “BJP was playing vote politics even during a disaster”.

The state government recently told a central expert committee, which had come to make a first-hand assessment of Amphan-inflicted damage, that the cost of the damage was more than Rs 1 lakh crore.

“If cyclone Aila showed us a decade ago that Sundarbans had nearly 4.5 million people living alongside the wildlife, Amphan has underlined the solution to counter such disasters. These solutions are already there, we only need to scale them up,” said Subhas Acharya, a member of Sundarbans Development Board.

State Sundarban affairs minister Manturam Pakhira said: “The brick houses and embankments made after Cyclone Aila could resist the cyclone.” He claimed that Amphan was bigger than any cyclone experienced by Sundarbans.

After Cylone Aila struck the state in 2009, Rs 5,000 crore was sanctioned to strengthen and rebuild close to 1,000 km of 3,500 km embankment in Sundarbans on the recommendations of an expert committee set up by the then Prime Minister Manmohon Singh. However, hardly 100 km of embankment has been constructed so far, while 20 per cent of the allotted money has already been spent.

Acharya pointed out that throughout Sundarbans, pucca houses and the embankments stood firm against the disaster. “The embankments breached only in Sagar, Namkhana, Patharpratima, Gosaba, Minakhan, Hingalgange in Sundarbans,” added Acharya.

According to state government, about 245 km of embankments were damaged during Amphan. “It’s a fact that wherever we built embankments, the storm had a weaker impact,” said a senior irrigation department official.

Aila embankment is a hybrid of earthen blocks and bricks with a spreading slope built inwards. It requires keeping space for a mangrove buffer in front, which means that it needs more land.

“Though providing meandering space to rivers, at least till the point the high tide spreads, is the best solution to counter such disasters. But that looks difficult, if not impossible, in present day Sundarbans that has a high population density. Amphan showed that Aila embankments are the next best option,” explained river expert and state pollution control board chairman Kalyan Rudra.

Sundarbans has a population of five million people in 54 of 102 islands, with a density over 1,000 per square kilometre.