At least 51 embankments in East Medinipur and 24 in South 24 Parganas were breached, CM Mamata Banerjee said 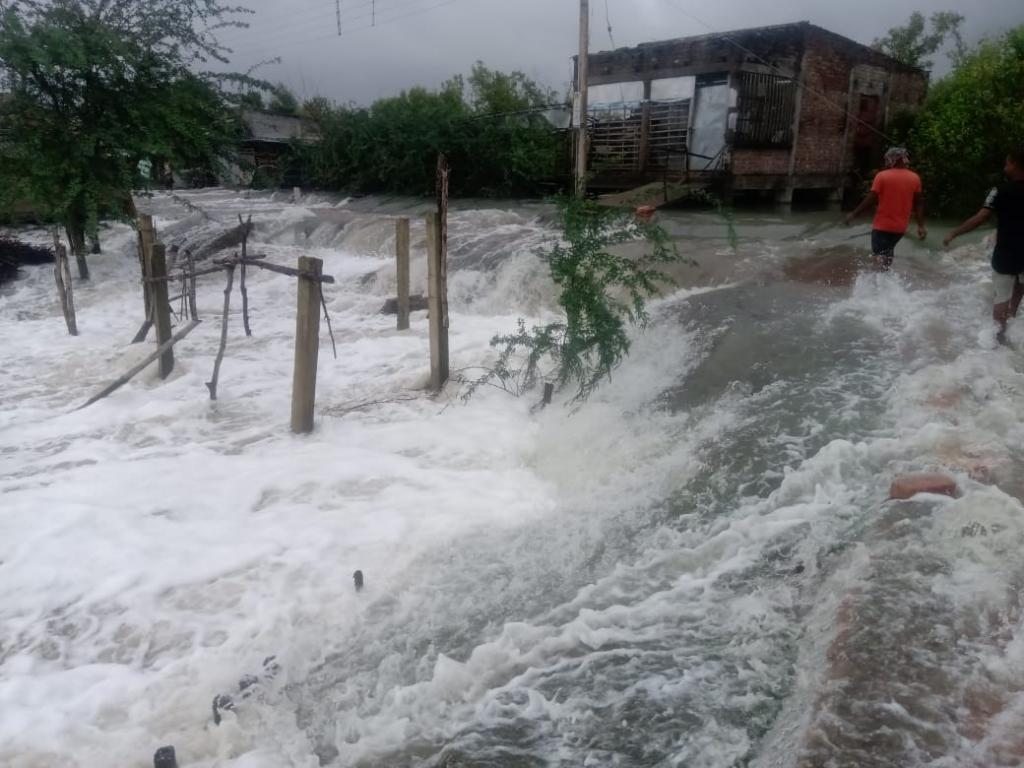 Cyclone Yaas made landfall with a speed lower than predicted — by 30 kilometres per hour — due to the geometry of landfall point. Several parts of West Bengal were nonetheless flooded — either due to overtopping or breaching of embankments as the landfall coincided with high tide.

Javed Khan, state disaster management minister, said “they are fighting the situation at a war footing.”

According to India Meteorological Department (IMD), the landfall started at 40 km south-southeast of Balasore in Odissa, about 60 km southwest of Digha in West Bengal at 9:15 am and continued beyond noon.

The landfall geometry, however, reduced the wind speed.

However the next bulletin at 3 am May 26 stated that the maximum sustained surface wind speed at 11.30 am May 26 would be 130-140 kmph gusting to 155 km, effectively reducing the maximum speed to around 30 km.

“The landfall speed was lower compared to what we earlier predicted. All other predictions from landfall point to time of landfall to direction of cyclone movement have been tallying to our predictions,” said Mrinttunjoy Mahapatra, director general, IMD.

KJ Ramesh, former director general, IMD, said the geometry of the landfall point led to the situation. He said:

As the cyclone made landfall around a narrow and shallow shelf between Balasore and Dhamra, it could not extract more energy from the sea, which would have been the case had the landfall happened in an open sea.

Several areas of West Bengal were flooded with six feet rise in water with the spring time high tide of about 18.5 feet; the cumulative water level rose to around 25 feet.

While the landfall initiated at about 9.15 am; high tide peak point was reached within a few hours as the landfall was in progress.

A former Kolkata Port Trust expert pointed out that most embankments in the state are 21 feet high. Hence, water surge of about 25 feet affected areas close to embankments.

IMD had earlier predicted that the flood water would encroach around three km of land area.

The CM pointed out that the overlapping of the cyclone and spring tide caused a lot of damage. “Many villages got inundated in Gosaba and South 24 Parganas; Sankarpur, Digha, Mandarmani, Tajpur in East Medinipur got completely flooded. Nearly 20,000 houses have been damaged,” the CM said.

The claimed 1.5 million people have been evacuated and taken to flood shelters so far.

“Embankment breaches were reported in 25-30 points in Pathar Pratima, with G Plot, located at the lap of Bay of Bengal, being the most affected. Nearly 40,000 people have been affected as houses, ponds and agricultural fields got inundated with saline water,” said Samir Jana, member of legislative assembly from Pathar Pratima.

A local from Mousuni lamented Baliara and adjoining areas were completely flooded and agricultural fields completely submerged with saline water.

“Dhablat, Shibpur, Chemaguri, Sumati Nagar and several other places were severely affected as Muriganga river got both breached and overtopped,” said Santanu Gayen, headmaster of a high school in Sagar.

According to locals, almost all the houses in Shahibnagar village of Khejuri in East Medinipur got damaged. “We are trying to rescue them,” said a senior official from the disaster department.