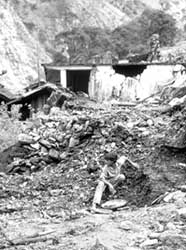 india can expect one or more devastating earthquakes in the near future, predict researchers from the University of Colorado, usa. An analysis of the shifting Indian subcontinent reveals enormous pent-up strain along most of the 1,200-km arc where it slides under the Himalaya and beyond the Tibetan plateau. The researchers say there is enough evidence that such pressures have been relieved in the past only through great earthquakes, far more powerful than the one that devastated Bhuj in Gujarat on January 26, 2001.

"More than 1,287km of the Himalayan mountain range constitute a catastrophe zone that is ripe, mature and ready to go," says Roger G Bilham, a geologist at the university and one of the authors of the study. Bilham said the pressures in the subterranean rock and the power of resulting earthquakes would only continue to build as the vast landmass inexorably pushes into Asia -- shifting almost two metres every century. "If it doesn't go now, it will be worse when it does," he adds.

The capitals of India, Pakistan, Bangladesh, Nepal and Bhutan face the maximum risk. After dividing the Himalaya into 10 regions of about 220 km -- each roughly corresponding to a past great earthquake -- the team found that 70 per cent of the arc could experience an earthquake with a magnitude 8.1 on the Richter scale and some could have one even as large as 8.3.

"We tried to eliminate the possibility of the earthquakes by looking at geophysical loopholes that might provide alternatives to such devastating events. But we failed," Bilham explained. "Never before have we seen such a huge human target," said Dennis Mileti, project director of the university's Natural Hazards Research and Applications Information Centre.