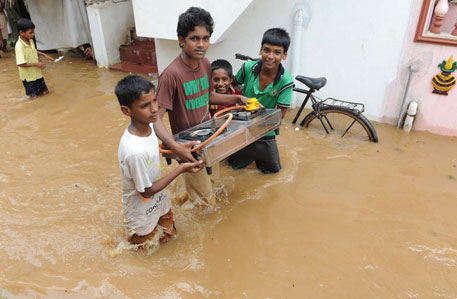 Prime minister Narendra Modi has announced an interim relief package of Rs 1,000 crore for the cyclone-affected areas in Andhra Pradesh. Modi, who arrived at Visakhapatnam airport at 1.45 pm Tuesday afternoon, made his announcement after an aerial inspection of the areas devastated by severe cyclone Hudhud. Modi also announced aid of Rs 2 lakh each to the kin of the deceased and Rs 50,000 for the injured.

"Andhra government and the Centre have worked with perfect co-ordination during the last five days," said Modi. He further assured that the centre and state government would do everything in their power for further assistance.

The coastal districts seem to have suffered much more than anticipated.

According to the state chief minister N Chandrababu Naidu, who spoke to the media before the prime minister's arrival, Hudhud has caused damage worth thousands of crores in Visakhapatnam (Vizag) and other cyclone-hit coastal districts of the state. Eastern Power Distribution Company of Andhra Pradesh alone is estimated to have suffered a loss of Rs 40,000 crore, said the chief minister. About 16,000 electric poles were knocked down and about 6,000 transformers have been damaged. Indian Navy has suffered Rs 2000 crore damage, the Vizag airport, the roof of which blew off in the cyclone, has suffered damage of Rs 500 crore. Damage to the Rashtriya Ispat Nigam Limited (Vizag steel plant) was estimated at Rs 1,000 crore. Andhra university's loss is estimated at Rs 300 crore.

Visakhapatnam, where the cyclone made the landfall, and the neighbouring East Godavari, Vizianagaram and Srikakulam district have suffered huge crop loss. A preliminary report says crops in at least 100,000 hectares must have been damaged.

The state government will give a report to the Centre after more detailed assessment of losses.

Vizag city experienced shortage of drinking water and essential commodities in many areas. People were out with cans and bottles.  The authorities have hired tankers from the neighbouring districts to provide water to the city.

While the authorities are trying their level best to restore power and clear roads and provide drinking water and food material  to the affected areas, a few of the trucks carrying essential food materials were ransacked in Vizag.  "Some people are selling essential items at high prices," pointed out the chief minister.

Food packages have to be provided in all parts of the affected areas, he said.

Meanwhile one more death has been reported from Srikakulam, taking the total toll of Hudhud in the state to 22.