Six bridges have been washed away by the floods; remote mountainous villages in Ladakh at risk 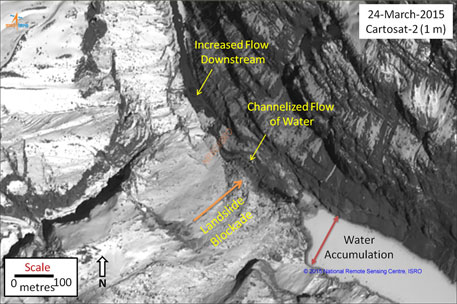 Around 3,000 residents of Zanskar sub-division in Ladakh, Jammu and Kashmir, are being evacuated to higher ground after an artificial lake created by a landslide on Phutkal river last year burst at about eight am on Thursday, Kargil district administration said.

The flash flood, triggered by the bursting of the 15-kilometre-long lake, has damaged bridges and buildings, including a school. No loss of life has been reported yet.

On December 31 last year, a massive landslide had blocked the Phuktal river, creating a lake containing more than 30 million cubic metres of water.

According to Hassan Khan, deputy commissioner of Kargil, six bridges have been washed away in the Zanskar sub-division. The floods will directly impact 40 villages in the Padam region. Authorities were yet to ascertain if there had been any damage to the Nimo-Bazgo Hydroelectric Power Project in the downstream of the Phutkal river, a tributary of Zanskar.

“The water level is increasing with every passing hour and the administration has asked the people living along the river to move to higher places,” said Khan in a statement to local media.

A technical committee, comprising National Disaster Management Authority (NDMA) officials and officials from the Central Water Commission, Geological Survey of India (GSI) and other agencies had visited the site on February 12 and collected rock and debris samples.

On April 1, a joint task force of the Army, Air Force and NDMA had said that they had used controlled explosions to create a 75-metre-long and 2-metre-wide channel through the wall of landslide debris to allow water to drain away.

Sphere India, a coalition of relief agencies working in disaster-prone areas, had earlier said that blasting the barrier would not help. It had explained that the valley was narrow and blasting would only lead to more debris blocking the river.