While many are fighting relocation, those who shift face conflicts with host villages over resources like water and grazing land. Is relocation the right way to mitigate disasters that are striking the Himalayan state with increasing ferocity? 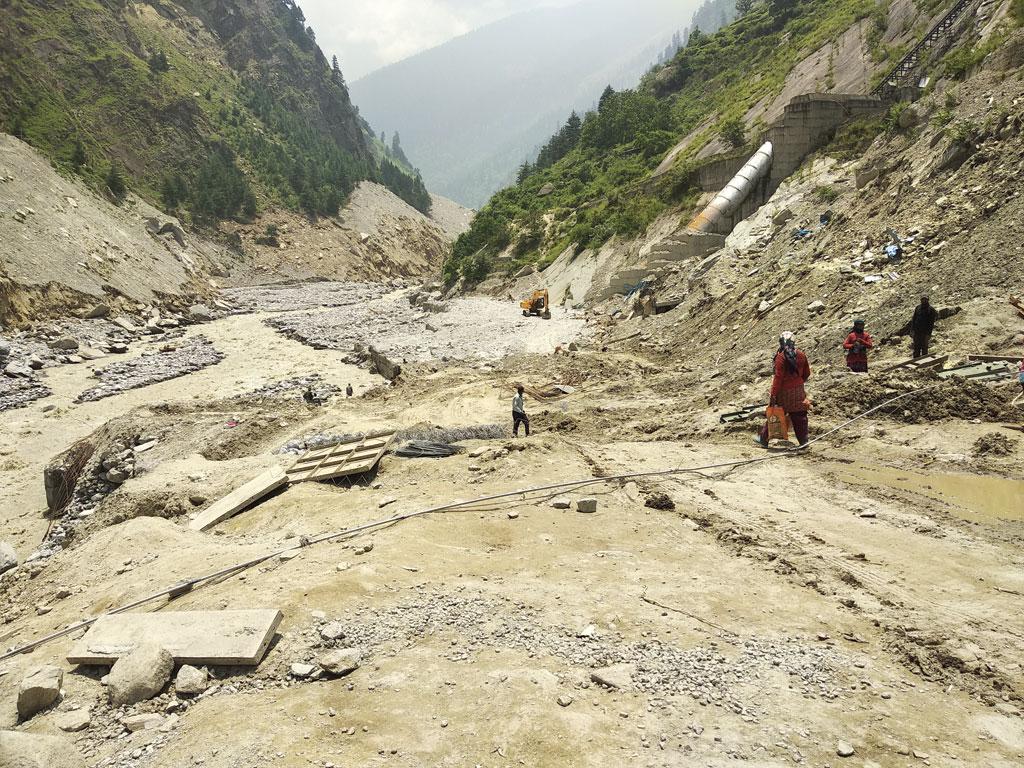 On July 18, 2021, when the Chamoli district administration moved the statue of Gaura Devi from Raini village to relatively safer Joshimath town, 25 kilometres downhill, it really removed the symbol of a historic event that helped protect the sensitive ecology of upper Himalaya until recently.

The legendary Gaura Devi in 1974 led the Chipko movement, launched by the women of Raini and other villages across the Garhwal Himalayas to protect its forests from loggers and its steep mountain slopes from getting washed away by rains. “Today we are fighting again but to leave Raini and be relocated to a safer place,” says sarpanch Bhawan Rana.

Located at an altitude of about 3,000 metres, just below the Nanda Devi glaciers, Raini is nestled on both sides of a deep gorge traversed by the Rishiganga river.

In 2000, the year when Uttarakhand became a separate state, the government allowed a 13 megawatt run-of-the-river hydroelectric project to be built on the Rishiganga, right below Raini. By 2005, construction on the dam and deforestation in the area were in full swing.

“Soon, houses developed cracks as the builders started blowing up the mountain just below the village. We have been demanding relocation since then. But no one paid heed until things got worse,” Rana claims.

This year, the village has experienced natural disasters after five decades, that too in quick succession. On February 7, 2021, flash floods triggered by a glacial breakage destroyed the power plant and flooded the lower part of the village. Officially, 206 people went missing and 88 bodies were recovered in the district; six of them were from Raini.

Between June 13 and 17, Raini was again hit by floods following incessant rainfall, and 14 houses in the lower part of the village were destroyed. A stretch of the Joshimath-Malari highway, which connects to the international border, also caved in.

Following the June floods, the district administration has advised the 14 households to temporarily shift to a school in Chaklata village located downhill. Over time, these families will be relocated to another village, Subhai, located 5 km uphill. Instead of offering relief, the process has aggravated the agony of the residents.

Among the many people in Raini who continue living in their cracked houses is the 50-year-old Tanuja Devi, who allege that the administration has failed to ensure the safety of people and their wares. Through a notice from the Joshimath tehsildar on June 16, 2021, pasted outside her house, Tanuja has been advised to relocate to the Chaklata school.

“We can reach there only after crossing the newly built Rishiganga bridge, which itself is at the risk of being washed away in case of a landslide. With our belongings and animals on this side, how can we keep shuttling back and forth from the school risking life and limb?” she asks.

In Subhai, the residents are already up in arms against the rehabilitation of Raini residents in their village. They have complained to the district administration that additional families would put increased pressure on limited common resources like grazing land and drinking water.

Such clashes are inherent to rehabilitation processes in mountainous regions where land and other resources are limited. Following the 1999 Chamoli earthquake, the government declared Pang-Muranda village as vulnerable and relocated it further upstream.

Since then, every night the residents queue up outside a pipe to fill up their buckets. The source of the pipe is inside another village, whose residents shut it in the morning to ensure water for themselves.

Even 20 years after rehabilitation, the only way to reach New Pang-Muranda is to walk on foot for two kilometres. Madan Singh Rana, a resident, says authorities cite paucity of land as the reason for not providing a road or permanent water source.

“Earlier, if a village or family became vulnerable, ad-hoc arrangements were made by the local administration,” says Piyoosh Rautela, executive director, Uttarakhand Disaster Mitigation and Management Centre, the apex centre that works for protection of the community and the environment in the state. “When the number of such families started to rise, the need for a policy was felt.”

In 2011, Uttarakhand became the first state to introduce a “rehabilitation policy” for people. Yet its implementation remains far from satisfactory.

Between 2012 and 2021, the government has identified 465 villages from where families need to be relocated, as per a release by the Uttarakhand State Disaster Management Authority (USDMA) on June 7, 2021. During this period, 1,101 families in only 44 villages have been relocated, says S A Murugesan, secretary, USDMA.

The resentment among people is high because most feel their plight to a large extent is state-sponsored. While the government has left no stone unturned to make the region vulnerable to natural calamities, it has not been prompt enough to rehabilitate people who are now falling victim to the disasters.

Dammed by the state

Himalayas, the youngest mountain range in the world, are naturally primed for calamities. It is susceptible to high erosion, earthquakes and its rivers cut the rocks deeply. In addition, rainstorms and cloud bursts lash these mountains.

The valleys in the Garhwal Himalayas, drained by the Alaknanda and Bhagirathi river systems, are among the most susceptible areas in the mountain range. Yet, the state did not hesitate to choke the river basins with hydropower projects and promote extensive construction activities in the region.

The situation is likely to worsen in the immediate future as 25 of the 41 projects currently under construction are also situated in the same basins.

A further analysis shows 65 per cent of the villages identified for relocation are in the upper catchment of the basin and are concentrated in Chamoli, Pithoragarh and Uttarkashi, which are home to over 30 hydropower projects and have seen more than half of the disasters reported since 2016 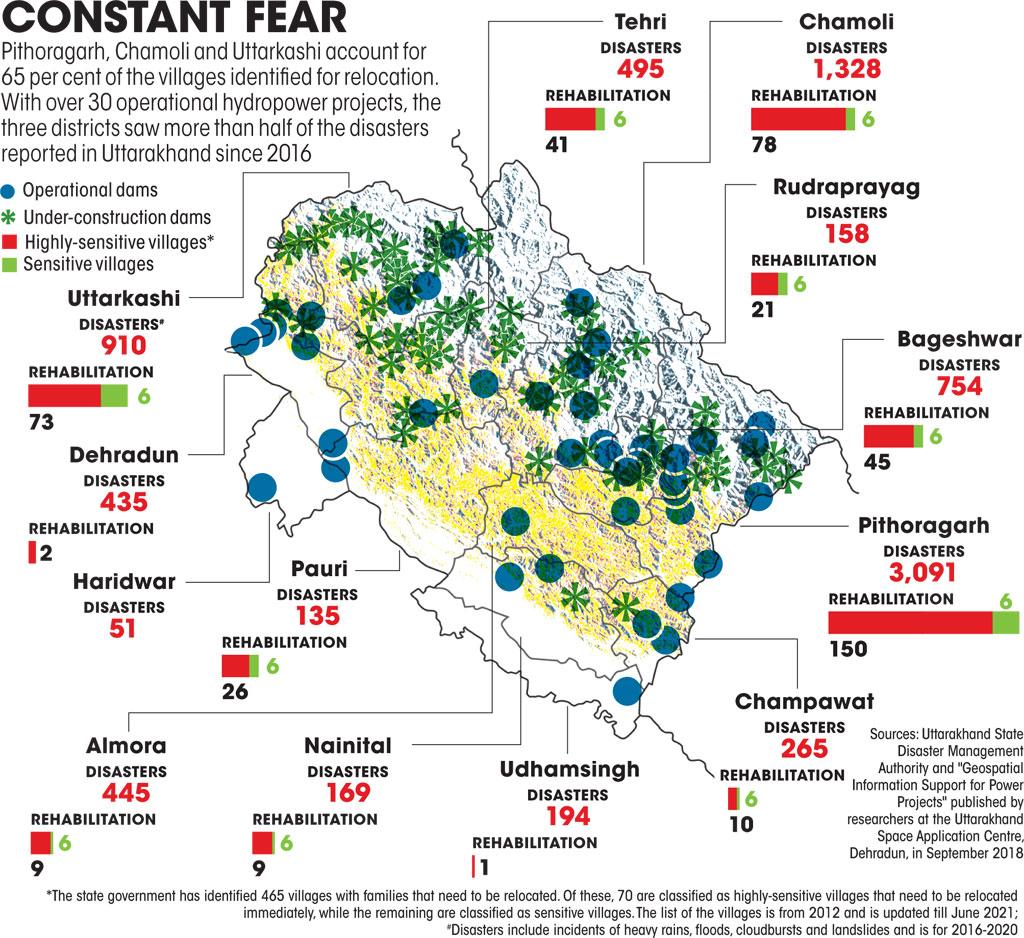 Uttarakhand Disaster 2013 report by the National Institute of Disaster Management in 2015 identifies dam construction as one of the reasons for increasing flash floods in the region. From 1989 to 1999, just before the state was notified, the region recorded four major flash floods that increased to 22 between 2002 and 2012.

Chameli village in Chamoli is one of the 44 villages the state government claims to have successfully relocated under the 2011 policy. But when Down to Earth visited Chameli it found a number of families living in the place, deemed unfit because of the surge in tremors post the 2013 Kedarnath flash floods.

Residents say the administration has offered a compensation of Rs 4 lakh to each of the 40 families in the village and asked them to look for land on their own. This is a clear violation of the rehabilitation policy that requires the government to identify the relocate site, provide 250 sq m of land for free to each rehabilitated family along with Rs 3 lakh for construction of a house.

The decision to not provide land has meant that while a few rich families from the village have managed to migrate to nearby commercial places like Gopeshwar and Chhinka Bazar, the others continue to live in the village under constant fear.

A similar scenario is unfolding in Semi-Bhainsari village of Rudraprayag district. This village, situated on the Kedarnath road near the Mandakini river, was completely gutted during the 2013 floods. The slow pace of rehabilitation work has only prolonged the ordeal for the 68 families of the village.

The process started almost four years after the disaster in 2017, when only 18 families who owned land outside the village were awarded Rs 7 lakh each under the World Bank and the state government-run owner-driven housing reconstruction programme. In 2019, the administration decided to award Rs 4.25 lakh each to an additional 39 families.

“But without land, these people were forced to build new homes within the village again,” says Kunwari Batwal, former village head of Semi-Bhainsari village. This year, compensation has been approved for eight other families though the money is yet to be transferred. The administration has asked the three remaining families to fend for themselves.

“Even the 18 families who moved out are struggling as they do not have land to farm or practice animal care. They also do not enjoy access to the panchayati forest,” says Batwal.

The 2011 policy recommends that relocated areas be close to their original village so displaced families can continue farming in their original land. In case this is not possible, the administration should ideally provide farmland of the same monetary value or pay a compensation. Further, if the families receive barren farmland, then they should receive an additional Rs 15,000 per hectare.

Rautela says rehabilitation is easier said than done. Almost all the rehabilitation cases end up in court as the number of families which demand monetary compensation is always more than the initial number identified immediately after the disaster.

“Often people who had left the village generations ago return to demand compensation,” he says. The overall budget for rehabilitation is also not adequate.

“Usually, the state allocates annual budget of Rs 1-1.5 crore. For any additional fund it reaches out to the Centre, which till date has not helped,” he says. Finding enough land derails most rehabilitation.

Manoj Rawat, legislator from Kedarnath, says the 2011 policy has become obsolete. “One cannot expect people to build houses with Rs 3 lakh,” he says.

The policy also remains ambiguous about farmland. So, people are either reluctant to relocate or eventually return to their village. Rautela says due to paucity of land, the government plans to reduce the number of villages that need relocation.

“Of the 465 identified villages, 70 are highly vulnerable and need to be relocated urgently. The remaining 395 villages can be restored,” he says.

The fact is no amount of policy tweaks will help alleviate the situation unless the state puts the break on its development frenzy.