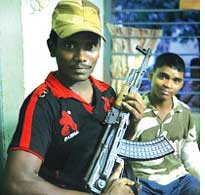 Salwa Judum in Chhattisgarh is a spontaneous revolt of the tribals against years of atrocities and harassment suffered by them at the hands of the Naxalites, said the National Human Rights Commission (nhrc) in its final report submitted to the Supreme Court.

Contrary to its initial report, submitted in mid-September, the final report seems to have downplayed the Salwa Judum's atrocities. Dismissing most of the allegations of human rights abuses made by petitioners in the apex court, it justified the programme. "The tribals cannot be denied the right to defend themselves against the atrocities perpetrated by the Naxalites, especially when the law enforcers are themselves ineffective or not present," the three-member panel said in the report.Only at a few places nhrc blamed the Salwa Judum for extremist actions like looting and burning of houses or made note of the fact that many who joined the anti-Naxal programme did not come willingly. The report underscored the fact that socio-economic deprivation led to the growth of Naxalism and suggested "multi-pronged approach" along with security-centric solutions.

Amid concerns over a possible attack of stem rust, Ug99, on wheat crops in Pakistan, scientists there have successfully developed a variety that is resistant to the virulent wheat fungus.

Scientists of Ayub Agricultural Research Institute (aari), Faisalabad, recently announced the development of Lasani 2008 wheat variety. The fungus, which first appeared in Uganda in 1999, reached Iran by March this year. It is now threatening Pakistan and India (see 'Cross border rust', Down To Earth, April 30, 2008). India plans to host an international conference in November for forging a global strategy to address the threat.

The Food and Agriculture Organisation (fao) is worried about the growing investments made by the Gulf countries in overseas farmland, particularly those in vulnerable economies of Africa and Asia. Following Abu Dhabi's recent deal to purchase 29,400 hectare farmland in Sudan, fao assigned a task force to assess the impact of such investments in poor and developing countries. Investors from across the Gulf, which heavily relies on food imports, say such deals help them secure cheap and reliable access to food, and at the same time help poor countries benefit from new investments and employment opportunities. Director General of fao Jacques Diouf, who visited Abu Dhabi in early September to discuss food security, however, termed such investments as "neo-colonialism".

China's zoo animals have become the latest victims even as Sanlu Group, the company at the centre of the scandal, has shut down. Several countries including the eu, India, France, South Korea, Iran and Russia have imposed restrictions on Chinese milk or dairy products.

The us government's us $700-billion bailout package for Wall Street firms has also generated a sigh of relief among renewable energy businesses in the country. Legislators tucked the renewable energy package, stalled for much of the year, in the bailout package. The Emergency Economic Stabilization Act of 2008 extends tax incentives for investments in wind, solar, biomass and other renewable energy sectors. The tax credit for wind energy development projects will be extended by one year and those for marine renewable projects will be extended by two years. Buyers of plug-in electric cars will also receive tax relief up to us $7,500. The legislation also provides incentives for producing biodiesel. Solar power gains the most a 30 per cent tax relief on both residential and commercial solar installations for eight years. In addition, the legislation offers tax credits for advanced coal-fired power plants and gives priority to plants with carbon sequestration projects. Senate Finance Committee Chairman Max Baucus said with the addition of the tax incentives for renewable energy sector, the bailout package will help average Americans and Wall Street. 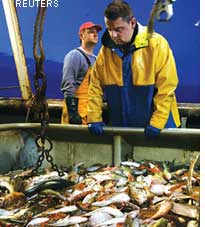 Of almost one million tonnes of fish are discarded in the North Sea every year, around 100,000 tonnes are dumped by Scottish boats, and this is due to lopsided eu rules, said the fisheries secretary of Scotland, Richard Lochhead, at a recent summit in Edinburgh.

One key reason for this dumping, upto 40 million (about us $70 million) worth of fish every year, is a mismatch between small fish quotas alloted to the country and an abundance of the stock in the North Sea, said Lochhead. This means, even though fishers catch more fish, they cannot land beyond their quotas. Fishermen at the summit said they can land what they catch in return by spending fewer days at sea. Lochhead thus called for a quota system based on the scientific guidance. 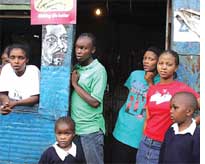 Even though Brazil achieved a robust economic growth this year, the latest Social Indicators Report, prepared by the Brazilian Geography and Statistics Institute, said that almost half of the country's children and youth live in poverty. In the poorest northeast area, over 68 per cent young ones are poor. The report also cites social inequalities. In 2007, the country's white workers had an average income almost twice that of non-whites.

Italy just joined Germany, France and Slovenia in clamping down on a class of neonicotinoid insecticides that are blamed for the death of millions of honeybees, dubbed Colony Collapse Disorder. The Italian government issued a ban on the use of the insecticides, thiamethoxam, clothianidin, imidacloprid and fipronil, which are mostly used as seed treatments in rapeseed, sunflower and sweetcorn farms. Italian beekeepers associations had long called for the ban.

Germany and Slovenia banned sales of clothianidin and imidacloprid--produced by Bayer CropScience--in May. France banned the spray of imidacloprid on sunflower plantations in 1999.

In a significant policy shift, the World Food Programme (wfp) announced that it would buy food directly from local farmers' associations in developing countries. Until now, the un agency bought food from big suppliers. Dubbed Purchase for Progress (p4p), the initiative aims to create reliable markets for low-income farmers. This will provide an alternative to the established bidding process, said Josette Sheeran, the executive director of the wfp. The injection of western food aid into a poor economy, even in an emergency, hurts local farmers by depressing local food prices. This makes viability harder for millions of small farmers.

As the Arctic summer ended in September, nasa said that the overall ice loss this year remained second to the record ice melting in 2007. The ice cover was at its lowest on September 26, covering 4.5 million sq km of the Arctic, compared to 4.1 million sq km last year. But what worried scientists is the rapid retreat of sea ice in August than ever before. From August 1 to August 31, the sea ice shrank at a rate of 84,692 sq km per day, compared to a rate of 63,195 sq km per day in August 2007. Scientists at nasa said this rapid melting proves that the Arctic has lost significant chunks of perennial ice in recent years. The perennial ice formed over the course of many years and are metres thick. When they melt or float away in summer, they are replaced by thin ice formed over the course of one winter. These thin ice sheets melt rapidly the next summer.

Farmers in Argentina began a nation-wide strike on October 3 seeking changes in government policy towards the agriculture sector. They have blocked exports of grain and beef. Earlier this year, they managed to block a government bill to increase taxes on agricultural exports after a four-month-long protest. The protest had led to food shortage in some parts of the country.