floods
Kosi breach yet to be plugged

The breach in the Kosi embankment that caused the devastating flood in Bihar may not be plugged before March 2009. The deadline for completion of the work was in November, but the state government extended it by four months. Though the government did not cite any specific reason for this, media reports link the delay to non-availability of dredgers. The machinery is needed for constructing a pilot channel in the Kosi near Nepal's Kusaha village to divert and minimize water flow from the breach. Only after that the breach can be plugged. In September the government sought the help of army engineers, but then the breach could not be plugged because of heavy water flow. The entire operation is likely to cost Rs 700 crore; the Centre has released part of the amount.However, it is yet to come up with any concrete measure to resettle over 35 lakh displaced people across five districts in Bihar who are still in relief camps.

Over six million people in Afghanistan will be pushed into high-risk food-insecurity this winter unless international aid agencies act fast. The country faces a deficit of two million tonnes of wheat flour and rice, said the government. According to the ministry of agriculture and livestock, the shortfall is because of a severe drought this year that led to 90 per cent crop failure. High food prices in the global market further impeded food imports. In July, the government and the Food and Agriculture Organization launched a joint appeal for us $404 million to meet the country's food requirement. So far, the appeal received only 40 per cent of the requested funding. Ministry officials said food convoys need to reach vulnerable areas before the roads leading to them become inaccessible in winter. Heavy snowfall blocked roads all over the country last winter.

An advisory committee to the government suggested creating a us $ 2 billion fund to promote secondary agriculture in the country. Secondary agriculture typically includes activities such as extracting medicines from herbs, oil from rice bran, milk from soya bean and biofuel from sugarcane. In the draft report, submitted to the Planning Commission recently, the Technical Advisory Committee for Secondary Agriculture recommended that the fund be set up in the 11th Five Year Plan (2007-2012). Secondary agriculture will help raise the contribution of agriculture in the national gdp by threefold from the current 19 per cent, the committee said. It proposed to create a central office to coordinate agriculture-related activities of different ministries and also to set up an expert panel for supporting the agro-industry.

Malawi pledged to create a green belt around the country's lakes and rivers enabl ing people to harvest crops all the year round. "This will end food shortage as well as international food aid," said President Bingu wa Mutharika. Dubbed Green Belt Programme, the plan is to irrigate land up to 20 km from shores. The government also plans to grow cash crops targeting international markets. Since 90 per cent of the country's agriculture is rain-fed, the major task ahead is to revive the numerous irrigation schemes lying defunct or underutilized. It appealed to the G-8 nations to support the programme. 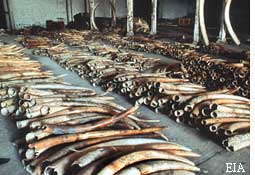 In the first sale of stockpiled ivory in nearly a decade, four southern African nations-Botswana, Namibia, South Africa and Zimbabwe-will auction over 100 tonnes of ivory in November. The ivory stocks are from 10,000 elephants that died from natural causes or from culling of herds to check overpopulation.

The un-backed Convention on International Trade in Endangered Species (cites), which approved the sales, said proceeds of the auctions will be used for elephant conservation. China and Japan, known for illegal ivory trade, are expected to be the biggest buyers. Meanwhile, the International Fund for Animal Welfare expressed dissatisfaction and said that flooding the market with such huge stock would act as a smokescreen for illegal ivory trade.

The us Environmental Protection Agency (epa) shelved two research projects that involved exposing infants and schoolchildren to pesticides and other harmful chemicals citing ethical concerns. The epa legalised experimentation on humans in 2007 amid public unease. Such studies are controversial because they often involve payments to parents to gain children's participation.

The Delhi government released Rs 200 crore for the construction of Renuka dam in Himachal Pradesh's Sirmour district. But on a condition the project has to supply 1,987 million litres of water a day (mld) to the capital state. The Rs 2,500 crore hydroelectricity project will generate 40 mw of power, which will go to Himachal Pradesh. In 1994, Delhi signed similar deals with Uttar Pradesh for 1,522 mld of water from Kishau and Lakhwar-Vyasi reservoirs, now in Uttarakhand. The projects are yet to be completed. Delhi draws water from Tehri dam in Uttarakhand and Bhakhra dam in Punjab, apart from the Yamuna. Despite this, south and south-west Delhi do not get adequate supply of water, forcing the government to invest in other states. Experts say even the new projects may not be able to fulfil Delhi's ever-rising water demand due to mismanagement.

To reassure countries that are banning imports of Chinese milk products, following the melamine crisis, the country introduced new safety levels for the chemical in food. The new rules set the melamine content for infant formula at one part per million (ppm) and that for the liquid milk, milk powder and other milk products with 15 per cent milk at 2.5 ppm. The rules also ban the use of melamine as an additive in food products. According to the us Food and Drug Administration, up to 2.5 ppm of melamine is safe for adults. Levels of melamine found in some batches of milk powder in China recently registered 6,196 ppm. By mid-October, over 58,000 children fell ill after drinking the contaminated milk (see 'Tainted milk', Down To Earth, October 1-15, 2008 ). 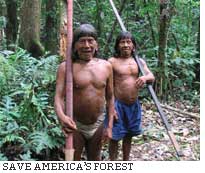 Ecuador said it may not be able to protect one of the world's most biodiverse places, the Yasun National Park, from oil drilling for long without any funding in place. The park, designated as a biosphere reserve by unesco, sits on a huge reserve of heavy crude oil, called the Ishpingo-Tambococha-Tiputini oil fields. In June 2007, the government said it was ready to keep hundreds of millions of barrels of crude in the ground, but in return it wanted the international community to compensate with about us $350 million a year for a decade. The deadline, already extended twice, is in December. But the country is yet to receive any funding. Ecuador's Oil and Mines Minister Galo Chiriboga said that the government would start proceedings to auction the oil fields through the state oil company Petroecuador by January if it didn't receive the resources it sought by the end of this year.

Brazil, the world's fifth highest emitter of greenhouse gases, released a draft plan of its national strategy on climate change. Though as a developing economy the country has no obligations under the Kyoto Protocol, the government said, the strategy would act as a halfway measure for emissions reduction. The plan calls for abolishing illegal deforestation and introducing reforestation programmes to double the forest cover by 2015. The strategy is also to generate 7,000 mw of electricity from renewables by 2010, enlarge the hydropower network and to double the production of ethanol litres, by 2017. The plan quickly came under criticism for lacking in specific emissions reduction targets and policy guidelines.

A nation-wide strike by judges and other judicial employees in Colombia continues despite an ultimatum by President lvaro Uribe on October 14 that those who don't show up at work by the next day may be dismissed. The strike has brought 80 per cent of activities in the judiciary to a halt since September 3; nearly 121,000 legal proceedings have come to a halt and over 25,000 court hearings have been postponed. The main demands of the judicial employees are guarantee of the independence of the judiciary and the enforcement of a 1992 salary adjustment law that was never implemented. This would bring judicial wing salaries in line with those of the legislative and executive wings.