Oil in the well 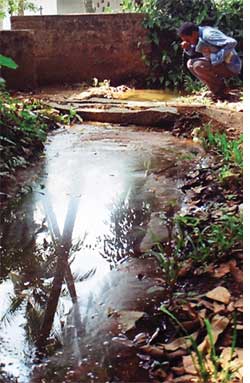 Kamala Shetty, resident of Kuthethoor village in Mangalore, was distressed when she looked into her well on a sunny April morning. The water, she found, was laced with oil. It's been over a month now; the oil is still there, and she has to walk several kilometres every day to fetch water from wells further off in the village. Like Kamala, 24 other families are also suffering the consequence of oil contamination by the Mangalore Refinery Petroleum Ltd. "The company promised to clean our wells, but it has not done that yet," said Kamala.

The company admitted oil had seeped into a pond, the source of water for people and their farms. Alwyn D'Souza of Kuthethoor said the com-pany had put charcoal to clean the pond but signs of contamination were visible. He added the company had failed to check leaks in the past 10 years.

The present seepage, however, may be due to a leakage in 1998, said Sharath Chandra, chairperson of the Karnataka State Pollution Control Board. "The leakage resurfaces chronically. We have asked the company to take up a study to trace the source of the leakage. The report is due soon,'' he said. The company has commissioned the study to the National Geographic Research Institute in Hyderabad.

After the seepage last month, the villagers complained to the district commissioner, who issued show-cause notice to the company and directed it to pay for drinking water to the 25 families. Last year too, people had filed a public nuisance case against the company. That, clubbed with this year's nuisance, makes it two cases against the company, said V Ponnuraj, the district commissioner. "We are writing to the pollution control board to depute experts for an independent assessment for the next course of action."

In 2005, the Supreme Court Empowered Committee on Hazardous Wastes had visited the plant and recommended disposal measures. A report by the pollution control board showed the plant had not fully heeded the recommendations.

The company maintained it was taking corrective measures such as funding the panchayat to lay pipelines, provide tanks and tankers to meet villagers' water requirement. "As a long-term measure, we are planning to lay a pipeline from our refinery that gets water from the Sarpadi dam to the 25 affected homes," said Lekshmi Kumaran, deputy general manager, communications.

Acknowledging the problem, Kumaran said, "We are the only refinery in the country above sea level. With leakage, it reappears in the water channel." Unable to identify the source of the leak, the company, as a temporary measure, had covered soil around the pond with sand and carbon.

The company purchased the land, including the pond, in 1993. But the family, which parted with about three hectares and the pond, is a worried lot. "The company has not given us the promised compensation of Rs 65,000 per acre and our well being depends on the pond's health," said Preethi, whose family gave away land for the refinery.

Sceptical of the company's plans, the villagers said water was their immediate need. Besides, they have had to stop activities around the pond. Thomas Fernandes who lives close to the pond stopped cultivating paddy in his one hectare because of poor yield.

While Kuthethoor villagers are dealing with oil contamination in their water, fishers at Chitrapur don't know what to do with a tar-like substance that is washed ashore every year during monsoon. The company pumps effluents into the sea at Chitrapur. Fishers said the catch in the area had reduced. They suspect the company is responsible but no one is sure. The New Mangalore Port Trust sent samples to the National Institute of Technology Karnataka, which found the tar like substance had high sulphur content, an end product of petroleum. "But we are yet to discover the source," said an official of the technology institute, on condition of anonymity. The National Institute of Oceanography in Goa is also studying the samples. Kumaran of the Mangalore Refinery Petroleum Ltd clarified the tarlike substance was not a result of their processes.

Villagers are equally worried about the company expanding its operations under the Mangalore special economic zone, which entails an expanded refinery and more petrochemical units among other plans.

For the villagers, said Preethi, it means more trouble.