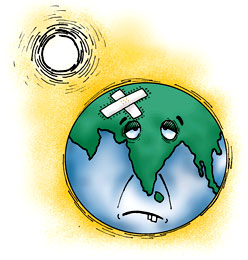 IT IS about the ozone layer. And it is not bad news. Some Australian scientists say if the amount of ozone-depleting substances (ODS) being released is reduced, the most famous layer of the Earth's atmosphere will begin to repair itself. However, before you rush to go tell your friends, bear in mind that the first clear signs of this 'healing' will take at least half a century to appear.

Paul Fraser of the Commonwealth Scientific and Research Organisation (CSIRO), Australia's premier scientific research establishment, says any repairs in the ozone layer will set in only after the year 2050, and the credible improvements may not be apparent for a further 20 years. Yet CSIRO's findings come as a bit of a relief, especially after the US National Aeronautical and Space Administration's Goddard Space Flight Centre measured the thickness of the ozone layer over the North Sea between Scotland and Norway on November 30, 1999, and found that it was just above half the global average (ENN Daily News, December 4, 1999).

The ozone layer, 14-32 km above the surface in the stratosphere, shields the Earth from the harmful ultraviolet rays of the Sun, and its thinning is expected to cause a range of public health problems. Chlorine and bromine atoms released from gases like chlorofluorocarbons (CFCs) and halons cause this thinning. While CFCs are industrial chemicals used in a range of products like refrigerators, halons were used in fire extinguishers till recently.

Although the results of the Montreal Protocol, a pact designed to save the ozone layer, is showing encouraging results in the reduction of the use of ODS, these chemicals have a long life and will keep depleting the ozone layer for several years. The thinning of the layer has stopped growing over the Arctic, but it is still continuing over Antarctica and parts of Australia. Each year, the size of the hole in the ozone layer over Antarctica peaks around September, covering an area thrice the size of Australia. At the Halley Bay of the frozen continent, measurements showed ozone concentrations to be less than half of what they were in the 1960s. The hole has become a major rallying point in environmental campaigns across the world.