Panchayat civil servants, not yet

States want them, but not willing to spend on their salaries 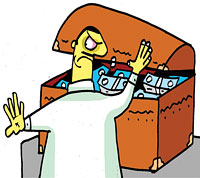 FIVE years since it was conceived, efforts to create a dedicated Panchayat Service Cadre for better implementation of rural development policies in the country have failed.

Reason: states are reluctant to spend on their salaries. The proposal of the Ministry of Rural Development for an exclusive service cadre provides for four dedicated officials with expertise in different fields in each of the 265,000 village panchayats in the country.

The ministry has put four conditions for panchayats to be included in the first phase of the scheme: those that have constructed Rajiv Gandhi Sewa Kendras or mini secretariats; have a population of over 5,000; fall in districts that have spent more than Rs 100 crore in 2009-10 under the rural employment guarantee scheme; or are in districts affected by Left extremism. The Centre will bear 80 per cent of the expenses the first year. Thereafter, it will reduce its share 10 per cent every year.

Most states rejected the proposal at a meeting in Delhi on September 22. “We fully support the initiative, but the Centre must make separate financial provision as states cannot spend on their salaries,” said Gopal Bhargava, rural development minister of Madhya Pradesh.

The Centre suggested states could use the Backward Region Grant Fund (programme for capacity building of panchayats in 200 districts) or grants routed to panchayats through finance commission. But the states did not agree. “The Centre should stagger its fund withdrawal over a 15 year period instead of eight years,” said S M Vijayanand, principal secretary of local governance affairs department of Kerala. The states also demanded freedom to choose the number of officials that too according their area of specialisation like education and engineering.

Past efforts to make the working of panchayats transparent have not been very successful. Only four states have implemented a provision in the Panchayati Raj Act that makes the government officials performing functions of the panchayats accountable to the elected representatives.